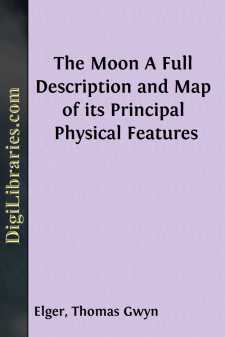 We know, both by tradition and published records, that from the earliest times the faint grey and light spots which diversify the face of our satellite excited the wonder and stimulated the curiosity of mankind, giving rise to suppositions more or less crude and erroneous as to their actual nature and significance. It is true that Anaxagoras, five centuries before our era, and probably other philosophers preceding him, —certainly Plutarch at a much later date—taught that these delicate markings and differences of tint, obvious to every one with normal vision, point to the existence of hills and valleys on her surface; the latter maintaining that the irregularities of outline presented by the "terminator," or line of demarcation between the illumined and unillumined portion of her spherical superficies, are due to mountains and their shadows; but more than fifteen centuries elapsed before the truth of this sagacious conjecture was unquestionably demonstrated. Selenography, as a branch of observational astronomy, dates from the spring of 1609, when Galileo directed his "optic tube" to the moon, and in the following year, in the Sidereus Nuncius, or "the Intelligencer of the Stars," gave to an astonished and incredulous world an account of the unsuspected marvels it revealed. In this remarkable little book we have the first attempt to represent the telescopic aspect of the moon's visible surface in the five rude woodcuts representing the curious features he perceived thereon, whose form and arrangement, he tells us, reminded him of the "ocelli" on the feathers of a peacock's tail,—a quaint but not altogether inappropriate simile to describe the appearance of groups of the larger ring-mountains partially illuminated by the sun, when seen in a small telescope.

The bright and dusky areas, so obvious to the unaided sight, were found by Galileo to be due to a very manifest difference in the character of the lunar surface, a large portion of the northern hemisphere, and no inconsiderable part of the south-eastern quadrant, being seen to consist of large grey monotonous tracts, often bordered by lofty mountains, while the remainder of the superficies was much more conspicuously brilliant, and, moreover, included by far the greater number of those curious ring- mountains and other extraordinary features whose remarkable aspect and peculiar arrangement first attracted his attention. Struck by the analogy which these contrasted regions present to the land and water surfaces of our globe, he suspected that the former are represented on the moon by the brighter and more rugged, and the latter by the smoother and more level areas; a view, however, which Kepler more distinctly formulated in the dictum, "Do maculas esse Maria, do lucidas esse terras." Besides making a rude lunar chart, he estimated the heights of some of the ring- mountains by measuring the distance from the terminator of their bright summit peaks, when they were either coming into or passing out of sunlight; and though his method was incapable of accuracy, and his results consequently untrustworthy, it served to demonstrate the immense altitude of these circumvallations, and to show how greatly they exceed any mountains on the earth if the relative dimensions of the two globes are taken into consideration....