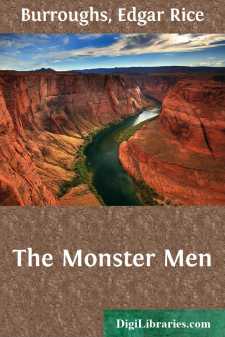 As he dropped the last grisly fragment of the dismembered and mutilated body into the small vat of nitric acid that was to devour every trace of the horrid evidence which might easily send him to the gallows, the man sank weakly into a chair and throwing his body forward upon his great, teak desk buried his face in his arms, breaking into dry, moaning sobs.

Beads of perspiration followed the seams of his high, wrinkled forehead, replacing the tears which might have lessened the pressure upon his overwrought nerves. His slender frame shook, as with ague, and at times was racked by a convulsive shudder. A sudden step upon the stairway leading to his workshop brought him trembling and wide eyed to his feet, staring fearfully at the locked and bolted door.

Although he knew perfectly well whose the advancing footfalls were, he was all but overcome by the madness of apprehension as they came softly nearer and nearer to the barred door. At last they halted before it, to be followed by a gentle knock.

"Daddy!" came the sweet tones of a girl's voice.

The man made an effort to take a firm grasp upon himself that no tell-tale evidence of his emotion might be betrayed in his speech.

"Daddy!" called the girl again, a trace of anxiety in her voice this time. "What IS the matter with you, and what ARE you doing? You've been shut up in that hateful old room for three days now without a morsel to eat, and in all likelihood without a wink of sleep. You'll kill yourself with your stuffy old experiments."

"I'll give you until noon, Daddy," said the girl in a voice which carried a more strongly defined tone of authority than her father's soft drawl, "and then I shall come into that room, if I have to use an axe, and bring you out—do you understand?"

Professor Maxon smiled wanly. He knew that his daughter was equal to her threat.

Virginia Maxon shrugged her shapely shoulders and shook her head hopelessly at the forbidding panels of the door.

"My dolls are all dressed for the day," she cried, "and I'm tired of making mud pies—I want you to come out and play with me." But Professor Maxon did not reply-he had returned to view his grim operations, and the hideousness of them had closed his ears to the sweet tones of the girl's voice.

As she turned to retrace her steps to the floor below Miss Maxon still shook her head.

"Poor old Daddy," she mused, "were I a thousand years old, wrinkled and toothless, he would still look upon me as his baby girl."

If you chance to be an alumnus of Cornell you may recall Professor Arthur Maxon, a quiet, slender, white-haired gentleman, who for several years was an assistant professor in one of the departments of natural science....