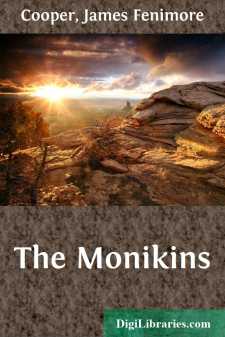 It is not improbable that some of those who read this book, may feel a wish to know in what manner I became possessed of the manuscript. Such a desire is too just and natural to be thwarted, and the tale shall be told as briefly as possible.

During the summer of 1828, while travelling among those valleys of Switzerland which lie between the two great ranges of the Alps, and in which both the Rhone and the Rhine take their rise, I had passed from the sources of the latter to those of the former river, and had reached that basin in the mountains that is so celebrated for containing the glacier of the Rhone, when chance gave me one of those rare moments of sublimity and solitude, which are the more precious in the other hemisphere from their infrequency. On every side the view was bounded by high and ragged mountains, their peaks glittering near the sun, while directly before me, and on a level with the eye, lay that miraculous frozen sea, out of whose drippings the Rhone starts a foaming river, to glance away to the distant Mediterranean. For the first time, during a pilgrimage of years, I felt alone with nature in Europe. Alas! the enjoyment, as all such enjoyments necessarily are amid the throngs of the old world, was short and treacherous. A party came round the angle of a rock, along the narrow bridle-path, in single file; two ladies on horseback, followed by as many gentlemen on foot, and preceded by the usual guide. It was but small courtesy to rise and salute the dove-like eyes and blooming cheeks of the former, as they passed. They were English, and the gentlemen appeared to recognize me as a countryman. One of the latter stopped, and politely inquired if the passage of the Furca was obstructed by snow. He was told not, and in return for the information said that I would find the Grimsel a little ticklish; "but," he added, smiling, "the ladies succeeded in crossing, and you will scarcely hesitate." I thought I might get over a difficulty that his fair companions had conquered. He then told me Sir Herbert Taylor was made adjutant-general, and wished me good morning.

I sat reflecting on the character, hopes, pursuits, and interests of man, for an hour, concluding that the stranger was a soldier, who let some of the ordinary workings of his thoughts overflow in this brief and casual interview. To resume my solitary journey, cross the Rhone, and toil my way up the rugged side of the Grimsel, consumed two more hours, and glad was I to come in view of the little chill-looking sheet of water on its summit, which is called the Lake of the Dead. The path was filled with snow, at a most critical point, where, indeed, a misplaced footstep might betray the incautious to their destruction. A large party on the other side appeared fully aware of the difficulty, for it had halted, and was in earnest discussion with the guide, touching the practicability of passing. It was decided to attempt the enterprise. First came a female of one of the sweetest, serenest countenances I had ever seen....