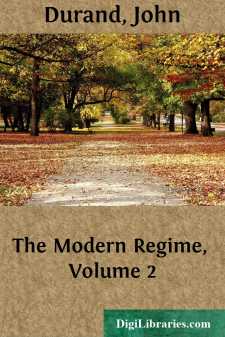 "To treat of the Church, the School, and the Family, describe the modern milieu and note the facilities and obstacles which a society like our own encounters in this milieu, such was the program of the last section of the "Origins of Contemporary France." The preceding volume is a continuation of the first part of this program; after the commune and the department, after local societies, the author was to study moral and intellectual bodies in France as organized by Napoleon. This study completed, this last step taken, he was about to reach the summit. He was about to view France as a whole, to comprehend it no longer through a detail of its organs, in a state of formation, but its actual existence; no longer isolated, but plunged, along with other occidental nations, into the modern milieu, experiencing with them the effects of one general cause which changed the physical and intellectual condition of men; which dissolved sentiments formerly grouping them together, more or less capable at length of adapting themselves to new circumstances and of organizing according to a new type suited to the coming age that now opens before us.

Only a part of this last volume was written, that which relates to the Church and to public instruction. Death intervened and suddenly arrested the pen. M. Taine, at this moment, was about completing his analysis of subordinate societies in France.—For those who have followed him thus far it is already clear that the great defect of the French community is the fragmentation of the individuals, who isolated, dwindling, and prostrate at the feet of the all-powerful State, who, due to remote historical causes, and yet more so by modern legislation, have been made incapable of "spontaneously grouping around a common interest." Very probably—and of this we may judge by two sketches of a plan, undoubtedly provisional, but the ideas of which were long settled in his mind—M. Taine would have first described this legislation and defined its principles and general characteristics. He meant to show it more and more systematic, deliberately hostile to collective enterprise, considering secondary bodies not as "distinct, special organs," endowed with a life of their own, "maintained and stimulated by private initiation," but as agents of the State "which fashions them after a common pattern, imposes on them their form and prescribes their work."—This done, this defect pointed out, the author was to enumerate the consequences flowing from it, the social body entirely changed, "not only in its proportions but in its innermost texture," every tendency weakened by which individuals form groups that are to last longer than themselves, each man reduced to his own self, the egoistic instinct enhanced while the social instinct wastes away for want of nourishment, his daily imagination solely concerned with life-long aims, incapacitated for politics as he is "lacking spheres of action in which he may train himself according to his experiences and faculties", his mind weakening in idleness and boredom or in a thirst for pleasure and personal success,—in short, an organic impoverishment of all faculties of cohesion, leading to the destruction of the natural centers of grouping and, consequently, to political instability.

One association of special import remains, the most spontaneous, the deepest rooted, so old that all others derive from it, so essential that in any attack upon it we see even the substance of the social body decaying and diminishing....