The Mistakes of Jesus 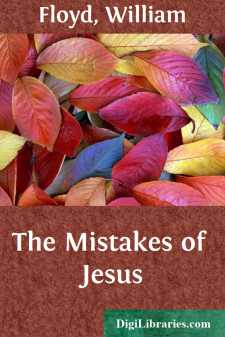 Add to My Favorites
Published: 8 years ago
Downloads: 84
Rating: (0 Votes)

The tradition regarding Jesus is so glamorous that it is difficult to review his life and character with an unbiased mind. While Fundamentalists and Modernists differ regarding the divinity of Christ, all Christians and many non-Christians still cling to preconceived notions of the perfection of Jesus. He alone among men is revered as all-loving, omniscient, faultless—an unparalleled model for mankind.

This convention of the impeccability of Jesus is so firmly established that any insinuation of error on his part is deemed a blasphemy. Doubting Jesus is more impious than mocking God Almighty. Jehovah may be exposed to some extent with impunity; a God who destroyed 70,000 of his chosen people because their king took a census is too illogical for any but theologians to worship. But the Son of God, or Son of man, is sacrosanct. Jesus is reverenced as the one man who has lived unspotted by the world, free from human foibles, able to redeem mankind by his example.

Respect for the principles of Jesus is so inbred in American people of all faiths that an attempt to disparage his worth is denounced as bad taste. The detractor is suspected of being an immoral person, no matter how convincing may be the proof which he presents. A conspiracy of silence is directed against any system of ethics advanced as superior to the Sermon on the Mount. In popular opinion Jesus never made a mistake; all his teachings were infallible; no other view is tolerated.

This unwillingness to acknowledge the shortcomings of Jesus is partially due to fear of sustaining a great loss. The familiar answer to heretical arguments is that faith should not be destroyed unless something can be put in its place—ignoring the fact that something always may be substituted for beliefs destroyed. That substitute is faith in the world as it really is. And our modern world, with all its shortcomings, is infinitely preferable to the earth, or even the heaven, of the first century. We now know that man can do more to eradicate sorrow than Jesus ever thought of. We can have greater confidence in the world as revealed today than in the doubtful traditions of Biblical times.

But suppose there were nothing to substitute for the myth destroyed, should that deter the Truthseeker from continuing his investigation? Scientists do not hesitate in their research because the result of a new discovery may be disastrous. They seek the facts regardless of consequences; they want to know the Truth about the physical world. Ethicists should have a similar desire concerning the metaphysical world. They should have confidence that the Supreme Intelligence (as Edison called it) will lead on to better things.

If Jesus was what his followers believe, no arguments will destroy their faith in him; but if Jesus was not perfect, according to modern standards, it is important that his status as God, or man, should be revised. Loss of confidence in an erring idol is not loss of a true ideal.

When an iconoclast asserts that Jesus lacked supreme intelligence, the natural question is, "How do you know that you are right in your appraisal, 'lest haply ye be found even to fight against God'?" The answer is that we do not claim omniscience, but merely request everyone to use his or her own judgment, with intellectual honesty, examining each act or saying of Jesus without regard to presupposed ideas or tradition.

The consensus of scholarship has rejected the creation of the universe in six days in 4004 b.c., science having proved the existence of the world for millions of years. Higher Critics refuse to credit the book of Genesis, according to the first chapter of which the trees, beasts and fowls were created before man, but according to the second chapter after man....