The Mirrors of Washington 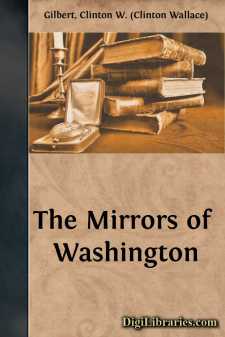 Every time we elect a new President we learn what a various creature is the Typical American.

When Mr. Roosevelt was in the White House the Typical American was gay, robustious, full of the joy of living, an expansive spirit from the frontier, a picaresque twentieth century middle class Cavalier. He hit the line hard and did not flinch. And his laugh shook the skies.

Came Wilson. And the Typical American was troubled about his soul. Rooted firmly in the church-going past, he carried the banner of the Lord, Democracy, idealistic, bent on perfecting that old incorrigible Man, he cuts off the right hand that offends him and votes for prohibition and woman suffrage, a Round Head in a Ford.

Eight years and we have the perfectly typical American, Warren Gamaliel Harding of the modern type, the Square Head, typical of that America whose artistic taste is the movies, who reads and finds mental satisfaction in the vague inanities of the small town newspaper, who has faith in America, who is for liberty, virtue, happiness, prosperity, law and order and all the standard generalities and holds them a perfect creed; who distrusts anything new except mechanical inventions, the standardized product of the syndicate which supplies his nursing bottle, his school books, his information, his humor in a strip, his art on a screen, with a quantity production mind, cautious, uniformly hating divergence from uniformity, jailing it in troublous times, prosperous, who has his car and his bank account and can sell a bill of goods as well as the best of them.

People who insist upon having their politics logical demand to know the why of Harding. Why was a man of so undistinguished a record as he first chosen as a candidate for President and then elected President?

As a legislator he had left no mark on legislation. If he had retired from Congress at the end of his term his name would have existed only in the old Congressional directories, like that of a thousand others. As a public speaker he had said nothing that anybody could remember. He had passed through a Great War and left no mark on it. He had shared in a fierce debate upon the peace that followed the war but though you can recall small persons like McCumber and Kellogg and Moses and McCormick in that discussion you do not recall Harding. To be sure he made a speech in that debate which he himself says was a great speech but no newspaper thought fit to publish it because of its quality, or felt impelled to publish it in spite of its quality because it had been made by Harding.

He neither compelled attention by what he said nor by his personality. Why, then, without fireworks, without distinction of any sort, without catching the public eye, or especially deserving to catch it, was Warren Harding elected President of the United States?

One plausible reason why he was nominated was that given by Senator Brandegee at Chicago, where he had a great deal to do with the nomination. "There ain't any first raters this year....