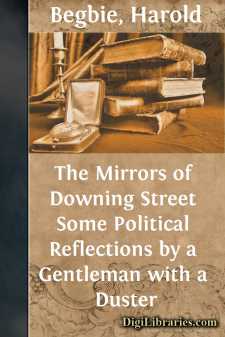 Let me say that I hope I have not betrayed any confidences in these sketches.

Public men must expect criticism, and no criticism is so good for them, and therefore for the State, as criticism of character; but their position is difficult, and they may justly complain when those to whom they have spoken in the candour of private conversation make use of such confidences for a public purpose.

If here and there I have in any degree approached this offence, let me urge two excuses. First, inspired by a pure purpose I might very easily have said far more than I have said: and, second, my purpose is neither to grind my own axe (as witness my anonymity) nor to inflict personal pain (as witness my effort to be just in all cases), but truly to raise the tone of our public life.

It is the conviction that the tone of our public life is low, and that this low tone is reacting disastrously in many directions, which has set me about these studies in political personality.

There is too much dust on the mirrors of Downing Street for our public men to see themselves as others see them. Some of that dust is from the war; some of it is the old-fashioned political dust intended for the eyes of the public; but I think that the worst of all hindrances to true vision is breathed on the mirrors by those self-regarding public men in whom principle is crumbling and moral earnestness is beginning to moulder. One would wipe away those smears.

My duster is honest cotton; the hand that holds it is at least clean; and the energy of the rubbing is inspired solely by the hope that such labour may be of some benefit to my country.

I think our statesmen may be better servants of the great nation they have the honour to serve if they see themselves as others see them—others who are not political adversaries, and who are more interested in the moral and intellectual condition of the State than in the fortunes of its parties.

No man can ever be worthy of England; but we must be anxious when the heart and centre of public service are not an earnest desire to be as worthy of her as possible.

CHAPTER I MR. LLOYD GEORGE "And wars, like mists that rise against the sun, Made him but greater seem, not greater grow."

If you think about it, no one since Napoleon has appeared on the earth who attracts so universal an interest as Mr. Lloyd George. This is a rather startling thought.

It is significant, I think, how completely a politician should overshadow all the great soldiers and sailors charged with their nation's very life in the severest and infinitely the most critical military struggle of man's history.

A democratic age, lacking in colour, and antipathetic to romance, somewhat obscures for us the pictorial achievement of this remarkable figure. He lacks only a crown, a robe, and a gilded chair easily to outshine in visible picturesqueness the great Emperor. His achievement, when we consider what hung upon it, is greater than Napoleon's, the narrative of his origin more romantic, his character more complex. And yet who does not feel the greatness of Napoleon?—and who does not suspect the shallowness of Mr. Lloyd George?

History, it is certain, will unmask his pretensions to grandeur with a rough, perhaps with an angry hand; but all the more because of this unmasking posterity will continue to crowd about the exposed hero asking, and perhaps for centuries continuing to ask, questions concerning his place in the history of the world. "How came it, man of straw, that in Armageddon there was none greater than you?"

The coldest-blooded amongst us, Mr. Massingham of The Nation for example, must confess that it was a moment rich in the emotion which bestows immortality on incident when this son of a village schoolmaster, who grew up in a shoemaker's shop, and whose boyish games were played in the street of a Welsh hamlet remote from all the refinements of civilization and all the clangours of industrialism, announced to a breathless Europe without any pomposity of phrase and with but a brief and contemptuous gesture of dismissal the passing away from the world's stage of the Hapsburgs and Hohenzollerns—those ancient, long glorious, and most puissant houses whose history for an æon was the history of Europe....