The Mirror of Literature, Amusement, and Instruction Volume 19, No. 549 (Supplementary number) 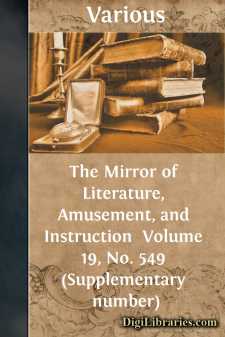 Accumulated novelties from Books published within the past month have led to the publication of the present Supplement. Although its contents have not been drawn from works of unfettered fancy, it is hoped they will be found to blend the real with the imaginative in such a degree as to render their knowledge not the less useful for its being amusive. The Engravings are perhaps as appropriate as attractive; since they illustrate, and the artists hope not unworthily, the New Sketch Book of WASHINGTON IRVING.

THE ALHAMBRA. By Geoffrey Crayon, author of the Sketch Book, &c.

What! Washington Irving, or, as the title-page will have it, Geoffrey Crayon, in SPAIN, wandering up and down the deserted halls of the Alhambra, and weaving its legendary lore with thick coming fancies into sketches of enchanting interest. The origin of the work, (the New Sketch Book,) as it has been inappropriately styled, is told in the dedication to David Wilkie, Esq., R.A. Mr. Irving and the great artist just named were fellow travellers on the continent a few years since. In their rambles about some of the old cities of Spain, they were more than once struck with scenes and incidents which reminded them of passages in the "Arabian Nights." The painter urged Mr. Irving to write something that should illustrate those peculiarities, "something in the Haroun Alrasched style" that should have a dash of that Arabian spice which pervades every thing in Spain. The author set to work, con amore, and has produced two goodly volumes, with a few "Arabesque" sketches and tales founded on popular traditions. His study was THE ALHAMBRA, which must have inspired him for his task. To quote his own words: "how many legends and traditions, true and fabulous; how many songs and romances, Spanish and Arabian, of love and war, and chivalry, are associated with this romantic pile." The Governor of the Alhambra gave Mr. Irving and his companion, permission to occupy his vacant apartments in the Moorish Palace. "My companion," says the author, "was soon summoned away by the duties of his station; but I remained for several months, spellbound in the old enchanted pile."

Such is the plan or frame of the work before us. It has induced us to select the Embellishments on the annexed page; and their description, from so graceful a pencil as that of the author, will, we hope, bespeak the favour of the reader.

"The Alhambra is an ancient fortress or castellated palace of the Moorish kings of Granada, where they held dominion over this their boasted terrestrial paradise, and made their last stand for empire in Spain. The palace occupies but a portion of the fortress, the walls of which, studded with towers, stretch irregularly round the whole crest of a lofty hill that overlooks the city, and forms a spur of the Sierra Nevada, or snowy mountain.

"In the time of the Moors, the fortress was capable of containing an army of forty thousand men within its precincts, and served occasionally as a stronghold of the sovereigns against their rebellious subjects....