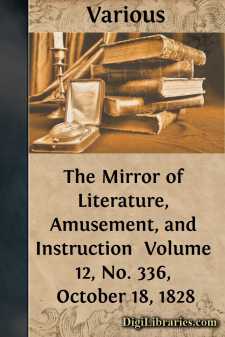 Richmond has comparatively but few antiquarian or poetical visiters, notwithstanding all its associations with the ancient splendour of the English court, and the hallowed names of Pope and Thomson. Maurice sings,

That ever yield my soul renew'd delight,

Richmond, I fly! with all thy beauties fir'd,

but ninety-nine out of a hundred who visit Richmond, thank the gods they are not poetical, fly off to the Star and Garter hill, and content themselves with the inspirations of its well-stored cellars. All this corresponds with the turtle-feasting celebrity of the modern Sheen; but it ill accords with the antiquarian importance and resplendent scenery of this delightful country.

Our engraving is from a very old drawing, representing the palace at Richmond, as built by Henry VII. The manor-house at Sheen, a little east of the bridge, and close by the river side, became a royal palace in the time of Edward I., for he and his successor resided here. Edward III. died here in 1377. Queen Anne, the consort of his successor, died here in 1394. Deeply affected at her death, he, according to Holinshed, "caused it to be thrown down and defaced; whereas the former kings of this land, being wearie of the citie, used customarily thither to resort as to a place of pleasure, and serving highly to their recreation." Henry V., however, restored the palace to its former magnificence; and Henry VII. held, in 1492, a grand tournament here. In 1499, it was almost consumed by fire, when Henry rebuilt the palace, and gave it the name of RICHMOND.

Cardinal Wolsey frequently resided here; and Hall, in his Chronicles, says, that "when the common people, and especially such as had been servants of Henry VII., saw the cardinal keep house in the manor royal at Richmond, which that monarch so highly esteemed, it was a marvel to hear how they grudged, saying, 'so a butcher's dogge doth lie in the manor of Richmond!'"

Queen Elizabeth was prisoner at Richmond during the reign of her sister Mary; after she came to the throne, the palace was her favourite residence; and here she died in 1608. Charles I. formed a large collection of pictures here; and Charles II. was educated at Richmond. On the restoration, the palace was in a very dismantled state, and having, during the commonwealth, been plundered and defaced, it never recovered its pristine splendour.

The survey taken by order of parliament in 1649, affords a minute description of the palace. The great hall was one hundred feet in length, and forty in breadth, having a screen at the lower end, over which was "fayr foot space in the higher end thereof, the pavement of square tile, well lighted and seated; at the north end having a turret, or clock-case, covered with lead, which is a special ornament to this building." The prince's lodgings are described as a "freestone building, three stories high, with fourteen turrets covered with lead," being "a very graceful ornament to the whole house, and perspicuous to the county round about." A round tower is mentioned, called the "Canted Tower," with a staircase of one hundred and twenty-four steps....