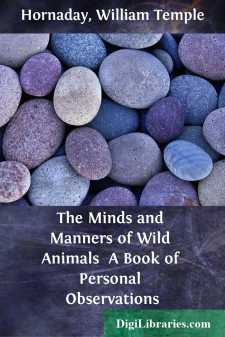 During these days of ceaseless conflict, anxiety and unrest among men, when at times it begins to look as if "the Caucasian" really is "played out," perhaps the English-reading world will turn with a sigh of relief to the contemplation of wild animals. At all events, the author has found this diversion in his favorite field mentally agreeable and refreshing.

In comparison with some of the alleged men who now are cursing this earth by their baneful presence, the so-called "lower animals" do not seem so very "low" after all! As a friend of the animals, this is a very proper time in which to compare them with men. Furthermore, if thinking men and women desire to know the leading facts concerning the intelligence of wild animals, it will be well to consider them now, before the bravest and the best of the wild creatures of the earth go down and out under the merciless and inexorable steam roller that we call Civilization.

The intelligence and the ways of wild animals are large subjects. Concerning them I do not offer this volume as an all-in-all production. Out of the great mass of interesting things that might have been included, I have endeavored to select and set forth only enough to make a good series of sample exhibits, without involving the general reader in a hopelessly large collection of details. The most serious question has been: What shall be left out?

Mr. A. R. Spofford, first Librarian of Congress, used to declare that "Books are made from books"; but I call the reader to bear witness that this volume is not a mass of quotations. A quoted authority often can be disputed, and for this reason the author has found considerable satisfaction in relying chiefly upon his own testimony.

Because I always desire to know the opinions of men who are writing upon their own observations, I have felt free to express my own conclusions regarding the many phases of animal intelligence as their manifestation has impressed me in close-up observations.

I have purposely avoided all temptations to discuss the minds and manners of domestic animals, partly because that is by itself a large subject, and partly because their minds have been so greatly influenced by long and close association with man. The domestic mammals and birds deserve independent treatment.

A great many stories of occurrences have been written into this volume, for the purpose of giving the reader all the facts in order that he may form his own opinions of the animal mentality displayed.

Most sincerely do I wish that the boys and girls of America, and of the whole world, may be induced to believe that the most interesting thing about a wild animal is its mind and its reasoning, and that a dead animal is only a poor decaying thing. If the feet of the young men would run more to seeing and studying the wild creatures and less to the killing of them, some of the world's valuable species might escape being swept away tomorrow, or the day after.

The author gratefully acknowledges his indebtedness to Munsey's Magazine, McClure's Magazine and the Sunday Magazine Syndicate for permission to copy herein various portions of his chapters from those publications....