The Midnight Passenger : a novel 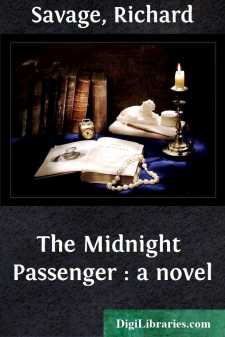 CHAPTER I. THE DANUBE PICTURE.

There was no air of uncertainty upon the handsome countenance ofMr. Randall Clayton as he stepped out of the elevator of a sedateFourteenth Street business building and approvingly sniffed theApril morning breeze.

On this particular Saturday of ninety-seven, the shopping multitude was already pouring from the Scylla of Simpson, Crawford & Simpson's on Sixth Avenue—and its Charybdis of the Big Store—past the jungles of Altman's, Ehrich's and O'Neill's—to dash feebly upon the buttressed corner of Macy's, and then die away in refluent, diverted waves, lost in the fastnesses of McCreery's and Wanamaker's, far down Broadway.

The pulses of the young man were vaguely thrilled with the coming of spring, and so he complacently took in the never-ceasing tide of eager women, on the street's shady side, with one comprehensive and kindly glance.

For six long years he had cautiously studied that same sea of always anxious faces! He well knew all the types from the disdainful woman of fashion, the crafty daughter of sin, the vacuous country visitor, down to the argus-eyed mere de famille, sternly resolute in her set purpose of making three dollars take the place of five, by some heaven-sent bargain.

Countless times he had threaded this restless multitude, with an alert devotion to the interests of the Western Trading Company. He was, to the ordinary lounger, but the type of the average well-groomed New York business man.

And yet, his watchful eyes swept keenly to right and left, as he breasted the singularly inharmonious waves of the weaker sex.

His left hand firmly gripped a Russian leather portmanteau of substantial construction, while his right lay loosely in the pocket of his modish spring overcoat.

To one having the gift of Asmodeus, that well-gloved right hand would have been revealed as resting upon the handle of a heavy revolver, and the contents of the tourist-looking portmanteau been known as some thirty-eight thousand dollars in well-thumbed currency and greasy checks of polyglot signatures.

It was the "short day" of the week's business, and the usual route for making his bank deposit lay before him. Down University Place to Eighth Street he was bent, thus avoiding the Broadway crush, and over to the shaded counting rooms of the Astor Place Bank.

Clayton's mind was concentrated, as usual, upon his important business. Few of the neighbors in the great office building knew of the vast interests represented by the modest sign "Western Trading Company."

Certain gray-bearded bookkeepers, a couple of brisk correspondents, a stony-faced woman stenographer, with a couple of ferret-eyed office boys were the office force, besides the travelling manager and Mr. Randall Clayton, the cashier and personal representative of the absent "head," who rarely left his Detroit home to interfere with the well-oiled movements of the "New York end."

But daily, rain or shine, Mr. Randall Clayton himself took his way to the bank to deposit the funds to meet their never-ceasing outflow of Western exchange....