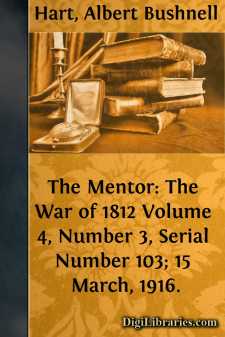 Our defeat of Great Britain in the Revolutionary War was conclusive; though "we" in that case included France, without whose aid the patriots must have been defeated. It is not so easy to discover a fund of military glory in the War of 1812.

That was a great war year. Within a few days of the declaration of war by the United States against Great Britain, Napoleon's Grand Army of over 400,000 men crossed the Niemen into Russia. Six months later 4,000 of that host recrossed, pursued by the Russians; and probably not more than 100,000 of the whole number ever saw their homes again. In 1813, while the Americans were fighting on the ocean and on Lake Erie, Napoleon was driven out of Germany. A few weeks before the Battle of Lundy's Lane, Napoleon was compelled to abdicate. Soon after the news of the Peace of Ghent with Great Britain was received in the United States, in 1815, Napoleon broke loose from Elba; and a few months later he was again a prisoner and sent to St. Helena.———Entered at the Postoffice at New York, N.Y., as second-class matter. Copyright, 1916, by The Mentor Association, Inc.

To most of Europe the American War of 1812 seemed an unwarrantable flank attack in the great running fight of the nations. Russia and Prussia resented it that American statesmen should throw the weight of their country on the side of the great military despot of his time. They wanted none of the military and naval strength of Great Britain to be diverted across the ocean. The suggestion was even made in Congress that the United States ought to declare war at the same moment on both France and England. That idea has been carried out by Captain Marryat in his once popular novel "Midshipman Easy," where he describes a triangular duel between three sailors; but nations could hardly engage in such a game.

Nevertheless Congress found some difficulty in selecting the enemy to fight; for the conditions were remarkably like those of the year 1915. People used to talk then about the "war between the elephant and the whale": the elephant being the land army of Napoleon, which apparently nothing could withstand, and the whale being the navy of Great Britain, which had command of the sea. That struggle reached a crisis in 1806, when the two belligerents, not being able to reach and hammer each other, did their best to hammer the neutral carrying trade, which was carried on largely in American ships.

THE SURRENDER OF GENERAL HULLGeneral Hull surrendered to General Brock, Governor of Upper Canada, at Detroit on August 16, 1812 BY ORDERS IN COUNCIL

Great Britain declared the whole French coast blockaded from Brest to the Elbe, just as in 1915 the same power declared the whole North Sea coast to be blockaded. By Decrees France declared the whole British Islands to be in a state of blockade, exactly as Germany recently declared those coasts to be a "naval zone." The consequence was that the French captured 600 American merchantmen in the next nine years, and the British took 900.

In this long controversy the French were the wiliest, the British were the most arrogant. The United States would have been justified in war against either of these powers, on the basis of their disregard of our right to keep up neutral trade with both belligerents.