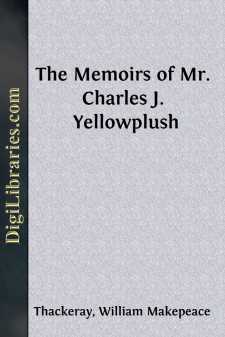 I was born in the year one, of the present or Christian hera, and am, in consquints, seven-and-thirty years old. My mamma called me Charles James Harrington Fitzroy Yellowplush, in compliment to several noble families, and to a sellybrated coachmin whom she knew, who wore a yellow livry, and drove the Lord Mayor of London.

Why she gev me this genlmn's name is a diffiklty, or rayther the name of a part of his dress; however, it's stuck to me through life, in which I was, as it were, a footman by buth.

Praps he was my father—though on this subjict I can't speak suttinly, for my ma wrapped up my buth in a mistry. I may be illygitmit, I may have been changed at nuss; but I've always had genlmnly tastes through life, and have no doubt that I come of a genlmnly origum.

The less I say about my parint the better, for the dear old creatur was very good to me, and, I fear, had very little other goodness in her. Why, I can't say; but I always passed as her nevyou. We led a strange life; sometimes ma was dressed in sattn and rooge, and sometimes in rags and dutt; sometimes I got kisses, and sometimes kix; sometimes gin, and sometimes shampang; law bless us! how she used to swear at me, and cuddle me; there we were, quarrelling and making up, sober and tipsy, starving and guttling by turns, just as ma got money or spent it. But let me draw a vail over the seen, and speak of her no more—its 'sfishant for the public to know, that her name was Miss Montmorency, and we lived in the New Cut.

My poor mother died one morning, Hev'n bless her! and I was left alone in this wide wicked wuld, without so much money as would buy me a penny roal for my brexfast. But there was some amongst our naybors (and let me tell you there's more kindness among them poor disrepettable creaturs, than in half a dozen lords or barrynets) who took pity upon poor Sal's orfin (for they bust out laffin when I called her Miss Montmorency), and gev me bred and shelter. I'm afraid, in spite of their kindness, that my MORRILS wouldn't have improved if I'd stayed long among 'em. But a benny-violent genlmn saw me, and put me to school. The academy which I went to was called the Free School of Saint Bartholomew's the Less—the young genlmn wore green baize coats, yellow leather whatsisnames, a tin plate on the left arm, and a cap about the size of a muffing. I stayed there sicks years; from sicks, that is to say, till my twelth year, during three years of witch I distinguished myself not a little in the musicle way, for I bloo the bellus of the church horgin, and very fine tunes we played too.

Well, it's not worth recounting my jewvenile follies (what trix we used to play the applewoman! and how we put snuff in the old clark's Prayer-book—my eye!); but one day, a genlmn entered the school-room—it was on the very day when I went to subtraxion—and asked the master for a young lad for a servant. They pitched upon me glad enough; and nex day found me sleeping in the sculry, close under the sink, at Mr....