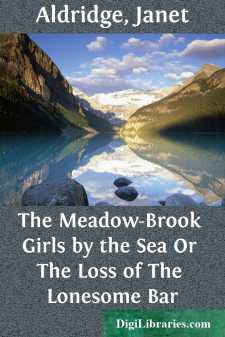 CHAPTER I A DELIGHTFUL MYSTERY

"I think we are ready to start, girls." Miss Elting folded the road map that she had been studying and placed it in a pocket of her long dust coat. There was a half-smile on her face, a merry twinkle in her eyes.

"Which way do I drive?" questioned Jane McCarthy.

"Straight ahead out of the village," answered Miss Elting, the guardian of the party of young girls who were embarking on their summer's vacation under somewhat unusual circumstances.

"It's the first time I ever started for a place without knowing what the place was, or where I was going," declared Jane McCarthy, otherwise known as "Crazy Jane."

"Won't you pleathe tell uth where we are going?" lisped Grace Thompson.

"Do my father and mother know where we are going?" persisted Grace.

"Of course they know, Tommy. The parents of each of you know, and I know, and so shall you after you reach your destination. Have you everything in the car, Jane?"

"Everything but myself," nodded Jane. The latter's automobile, well loaded with camping equipment, stood awaiting its passengers. The latter were Miss Elting, Jane McCarthy, Harriet Burrell, Grace Thompson, Hazel Holland and Margery Brown, the party being otherwise known as "The Meadow-Brook Girls." "Get in, girls. We'll shake the dust of Meadow-Brook from our tires before you can count twenty," continued Jane. "If Crazy Jane were to drive through the town slowly folks surely would think something startling had happened to her. Is there anything you wish to do before we leave, Miss Elting?"

"Not that I think of at the moment, Jane."

"I have thaid good-bye," answered Grace with finality.

"We'll give them a farewell blast," chuckled Jane. With that she climbed into the car, and, with a honk of the horn, drove down that street and into the next, keeping the horn going almost continually. As they passed the home of each girl the young women gave the yell of the Meadow-Brook Girls:

It was shouted in chorus at their homes, and as the car passed the homes of their friends as well. Hands were waved from windows, hats were swung in the air by boy friends, while the older people smiled indulgently and nodded to them as the rapidly moving motor car passed through the village.

"I think the town knows all about it now. Suppose we make a start?" suggested Miss Elting.

"Nor the butcher, the baker and the candle-stick maker," answered Harriet Burrell laughingly. "How long a drive have we, Miss Elting?"

"Four or five hours, ordinarily. Jane undoubtedly will make it in much less time, if she drives at her usual rate of speed. Straight south, Jane. I will tell you when to change."

The faces of the girls wore a puzzled expression. They could not imagine where they were going. Miss Elting had made a mystery of this summer vacation, and not a word had the girls been able to obtain from her as to where they were to go: whether to tour the country in Crazy Jane's automobile, or to go into camp. Tommy declared that it was a perfectly delightful mythtery, and that she didn't care where they were going, while Margery on the contrary, grumbled incessantly.

The start had been made late in the afternoon. The day had been cloudy. There were even indications of rain, but the girls did not care. They were too well inured to the weather to be disturbed by lowering skies and threatening clouds. In the meantime Jane McCarthy was bowling along to the southward, throwing up a cloud of dust, having many narrow escapes from collisions with farmers' wagons and wandering stock....