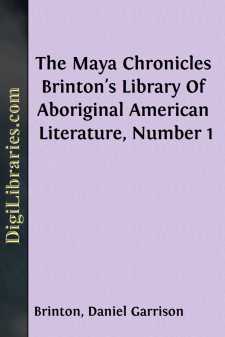 1. The Name “Maya.” 2. The Maya Linguistic Family. 3. Origin of the Maya Tribes. 4. Political Condition at the time of the Conquest. 5. Grammatical Observations. 6. The Numeral System. 7. The Calendar. 8. Ancient Hieroglyphic Books. 9. Modern Maya Manuscripts. 10. Grammars And Dictionaries of the Language.

In his second voyage, Columbus heard vague rumors of a mainland westward from Jamaica and Cuba, at a distance of ten days’ journey in a canoe. Its inhabitants were said to be clothed, and the specimens of wax which were found among the Cubans must have been brought from there, as they themselves did not know how to prepare it.

During his fourth voyage (1503-4), when he was exploring the Gulf southwest from Cuba, he picked up a canoe laden with cotton clothing variously dyed. The natives in it gave him to understand that they were merchants, and came from a land called Maia.

This is the first mention in history of the territory now called Yucatan, and of the race of the Mayas; for although a province of similar name was found in the western extremity of the island of Cuba, the similarity was accidental, as the evidence is conclusive that no colony of the Mayas was found on the Antilles. These islands were peopled by a wholly different stock, the remnants of whose language prove them to have been the northern outposts of the Arawacks of Guiana, and allied to the great Tupi-Guaranay stem of South America.

Maya was the patrial name of the natives of Yucatan. It was the proper name of the northern portion of the peninsula. No single province bore it at the date of the Conquest, and probably it had been handed down as a generic term from the period, about a century before, when this whole district was united under one government.

The natives of all this region called themselves Maya uinic, Maya men, or ah Mayaa, those of Maya; their language was Maya than, the Maya speech; a native woman was Maya cÄ§uplal; and their ancient capital was Maya pan, the Maya banner, for there of old was set up the standard of the nation, the elaborately worked banner of brilliant feathers, which, in peace and in war, marked the rallying point of the Confederacy.

We do not know where they drew the line from others speaking the same tongue. That it excluded the powerful tribe of the Itzas, as a recent historian thinks, seems to be refuted by the documents I bring forward in the present volume; that, on the other hand, it did not include the inhabitants of the southwestern coast appears to be indicated by the author of one of the oldest and most complete dictionaries of the language. Writing about 1580, when the traditions of descent were fresh, he draws a distinction between the lengua de Maya and the lengua de Campeche. The latter was a dialect varying very slightly from pure Maya, and I take it, this manner of indicating the distinction points to a former political separation.

The name Maya is also found in the form Mayab, and this is asserted by various Yucatecan scholars of the present generation, as Pio Perez, Crescencio Carrillo, and Eligio Ancona, to be the correct ancient form, while the other is but a Spanish corruption.

But this will not bear examination....