The Mate of the Lily Notes from Harry Musgrave's Log Book 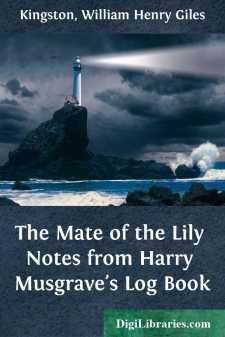 Jack Radburn, mate of the “Lily,” was as prime a seaman as ever broke biscuit. Brave, generous, and true, so said all the crew, as did also Captain Haiselden, with whom he had sailed since he had first been to sea. Yet so modest and gentle was he on shore that, in spite of his broad shoulders and sun-burnt brow, landsmen were apt to declare that “butter wouldn’t melt in his mouth.”

A finer brig than the “Lily” never sailed from the port of London. Well built and well found—many a successful voyage had she made to far distant seas. Jack Radburn might have got command of a larger craft, but Captain Haiselden, who had nursed him through a fever caught on the coast of Africa, and whose life on another occasion he had saved, thus closely cementing their friendship, begged him to remain with him for yet another voyage, likely to be the most adventurous they had ever yet undertaken.

Jack Radburn, who was my uncle, stayed when on shore—not often many weeks together—with his sister, Mrs Musgrave, my mother.

Though he was my uncle, I have spoken of him as Jack Radburn, mate of the “Lily,” as did everybody else; indeed, he was, I may say, as well known as the captain himself. My mother, who was the daughter of a clergyman long since dead, had not many acquaintances. She had been left by my grandfather with little or nothing to depend upon, when her brother introduced to her my father, then first mate of the ship to which he belonged.

Her greatest friend was Grace Bingley, who lived with her mother, wife of a ship-master, a few doors off from us.

Uncle Jack had consequently seen much of Grace Bingley, and had given her the whole of his warm honest heart, nor was it surprising that he had received hers in return, and pretty tightly he held it too. Even my mother acknowledged that she was worthy of him, for a sweeter or more right-minded girl was not, far or near, to be found.

Some four years before the time of which I am now speaking, my father sailed in command of a fine ship, the “Amphion,” for the Eastern seas. The time we had expected him to return had long passed away. My mother did not, however, give up all expectation of seeing him, but day after day and week after week we looked for him in vain. The owners at last wrote word that they feared the ship had been lost in a typhoon, but yet it was possible that she might have been cast away on some uninhabited island from whence the crew could not effect their escape. My mother therefore still hoped on and endeavoured to eke out her means so as to retain her house that my father might find a home should he return.

I was setting off with Uncle Jack for the “Lily,” which was undergoing a thorough repair, and he seldom failed to pay her one or two visits in the day to see how things were going on, when two seamen came rolling up the street towards us in sailor fashion, and looking, it seemed to me, as if they had been drinking, though they may not have been exactly drunk. As they approached one nudged the other, and, looking at Uncle Jack, exchanged a few words.

They would have passed us, when he, having noticed this, hailed them—

“What cheer, my hearties, have we ever sailed together?”

“Can’t say exactly, sir, for we’ve knocked about at sea so long that it’s hard to mind all the officers we’ve served under. But now I looks at you, sir, I think you used to come aboard the ‘Amphion’ before she left Old England....