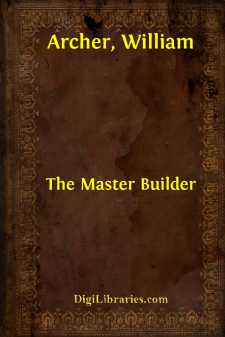 "Ibsen," says Dr. Brahm, "wrote in Christiania all the four works which he thus seems to bracket together—Solness, Eyolf, Borkman, and When We Dead Awaken. He returned to Norway in July 1891, for a stay of indefinite length; but the restless wanderer over Europe was destined to leave his home no more.... He had not returned, however, to throw himself, as of old, into the battle of the passing day. Polemics are entirely absent from the poetry of his old age. He leaves the State and Society at peace. He who had departed as the creator of Falk [in Love's Comedy] now, on his return, gazes into the secret places of human nature and the wonder of his own soul."

Dr. Brahm, however, seems to be mistaken in thinking that Ibsen returned to Norway with no definite intention of settling down. Dr. Julius Elias (an excellent authority) reports that shortly before Ibsen left Munich in 1891, he remarked one day, "I must get back to the North!" "Is that a sudden impulse?" asked Elias. "Oh no," was the reply; "I want to be a good head of a household and have my affairs in order. To that end I must consolidate may property, lay it down in good securities, and get it under control—and that one can best do where one has rights of citizenship." Some critics will no doubt be shocked to find the poet whom they have written down an "anarchist" confessing such bourgeois motives.

After his return to Norway, Ibsen's correspondence became very scant, and we have no letters dating from the period when he was at work on The Master Builder. On the other hand, we possess a curious lyrical prelude to the play, which he put on paper on March 16, 1892. It is said to have been his habit, before setting to work on a play, to "crystallise in a poem the mood which then possessed him;" but the following is the only one of these keynote poems which has been published. I give it in the original language, with a literal translation: