The Masques of Ottawa 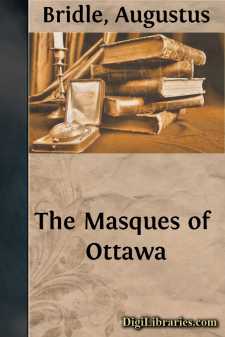 Do not imagine that I spend much time at once in Ottawa. I have never liked the kind of play-house that politicians have made on that glorious plateau in a valley of wonderland with a river of dreams rolling past to the sea. Where under heaven is any other Capital so favoured by the great scenic artist? On what promontory do parliamentary towers and gables so colossally arise to enchant the vision? The Thames draws the ships of the world and crawls muddily and lazily out to sea wondering what haphazard of history ever concentrated so much commerce, politics and human splendour on the banks of one large ditch. Ottawa's house of political drama overlooks one of the noblest rivers in the world, that takes its rise in everlasting hills of granite and pines.

One, Laurier, used to dream that he would devote his declining days to making Ottawa beautiful as a city as she is for the site of a capital. To him as to others, Rome, London, Paris, Vienna, Washington, should all in time be rivalled by Ottawa the magnificent. But the saw-mill surveyors of Ottawa spoiled that when they made no approach to Parliament Hill to compare to the vista seen from the river. Ottawa was built for convenience: for opportunity: for expediency.

Parliament is its great show. Politicians are the actors. Time has seen some interesting, almost baffling, dramas on that hill. No other Parliament stands midway of so vast a country. But there are people who prefer Hull, P.Q., to Ottawa, Ont. We have had some mild Mephistos of strategy up there: some prophets of eloquence: some dreamers of imagination: giants of creative energy scheming how to draw a young, vast country together into nationhood so that the show-men on Parliament Hill might have an audience.

But the Ottawa of to-day is a strange spectacle for the prophets. The great new Opera House is all but finished, when no seer can tell whether the plays to be put on there by the parties of the future will be as epical and worthwhile as those staged by the actors of the past. Imagination was not absent when Ottawa was created. But it needs more than common imagination to foresee whether these political playboys of the northern world are going to be worthy of the great audience soon to arise in the country that converges upon Ottawa.

Sometimes in Parliament you catch the vibration of big momentums in a nation's progress. Voices now and then arise in speech that reflect some greatness of vision. More often the actors are sitting indolently, hearing the clack of worn-out principals whose struts and grimaces and cadences are those of men whose cues should lead them to the dressing rooms, or to the wings, or somewhere into the maze of the back drop where nobody takes part in the show. Or they listen to men whose big informing idea constantly is that all we need to make economic happiness for everybody is to turn out the company now in and get another from the furrows. These latter believe that a nation is a condition of free trade—mainly on behalf of the farmer whose average idea of industry is a blacksmith shop on a farm....