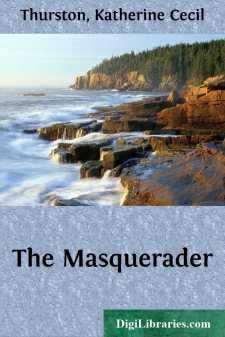 Two incidents, widely different in character yet bound together by results, marked the night of January the twenty-third. On that night the blackest fog within a four years' memory fell upon certain portions of London, and also on that night came the first announcement of the border risings against the Persian government in the province of Khorasan the announcement that, speculated upon, even smiled at, at the time, assumed such significance in the light of after events.

At eight o'clock the news spread through the House of Commons; but at nine men in the inner lobbies were gossiping, not so much upon how far Russia, while ostensibly upholding the Shah, had pulled the strings by which the insurgents danced, as upon the manner in which the 'St. Geotge's Gazette', the Tory evening newspaper, had seized upon the incident and shaken it in the faces of the government.

More than once before, Lakely—the owner and editor of the 'St. George's'—had stepped outside the decorous circle of tradition and taken a plunge into modern journalism, but to-night he essayed deeper waters than before, and under an almost sensational heading declared that in this apparently innocent border rising we had less an outcome of mere racial antagonism than a first faint index of a long-cherished Russian scheme, growing to a gradual maturity under the "drift" policy of the present British government.

The effect produced by this pronouncement, if strong, was varied. Members of the Opposition saw, or thought they saw, a reflection of it in the smiling unconcern on the Ministerial benches; and the government had an uneasy sense that behind the newly kindled interest on the other side of the House lay some mysterious scenting of battle from afar off. But though these impressions ran like electricity through the atmosphere, nothing tangible marked their passage, and the ordinary business of the House proceeded until half-past eleven, when an adjournment was moved.

The first man to hurry from his place was John Chilcote, member for East Wark. He passed out of the House quickly, with the half-furtive quickness that marks a self-absorbed man; and as he passed the policeman standing stolidly under the arched door-way of the big court-yard he swerved a little, as if startled out of his thoughts. He realized his swerve almost before it was accomplished, and pulled himself together with nervous irritability.

"Foggy night, sir, and thickening up west," responded the man.

"Ah, indeed!" Chilcote's answer was absent. The constable's cheery voice jarred on him, and for the second time he was conscious of senseless irritation.

Without a further glance at the man, he slipped out into the court-yard and turned towards the main gate.

At the gate-way two cab lamps showed through the mist of shifting fog like the eyes of a great cat, and the familiar "Hansom, sir?" came to him indistinctly.

He paused by force of custom; and, stepping forward, had almost touched the open door when a new impulse caused him to draw back.

The cabman muttered, lashed his horse, and with a clatter of hoofs and harness wheeled away; while Chilcote, still with uncertain hastiness, crossed the road in the direction of Whitehall.

About the Abbey the fog had partially lifted, and in the railed garden that faces the Houses of Parliament the statues were visible in a spectral way. But Chilcote's glance was unstable and indifferent; he skirted the railings heedlessly, and, crossing the road with the speed of long familiarity, gained Whitehall on the lefthand side....