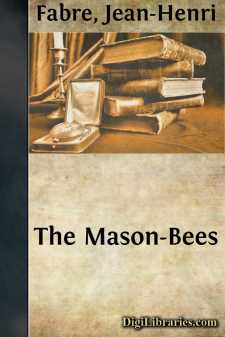 Reaumur (Rene Antoine Ferchault de Reaumur (1683-1757), inventor of the Reaumur thermometer and author of "Memoires pour servir a l'histoire naturelle des insectes."—Translator's Note.) devoted one of his papers to the story of the Chalicodoma of the Walls, whom he calls the Mason-bee. I propose to go on with the story, to complete it and especially to consider it from a point of view wholly neglected by that eminent observer. And, first of all, I am tempted to tell how I made this Bee's acquaintance.

It was when I first began to teach, about 1843. I had left the normal school at Vaucluse some months before, with my diploma and all the simple enthusiasm of my eighteen years, and had been sent to Carpentras, there to manage the primary school attached to the college. It was a strange school, upon my word, notwithstanding its pompous title of 'upper'; a sort of huge cellar oozing with the perpetual damp engendered by a well backing on it in the street outside. For light there was the open door, when the weather permitted, and a narrow prison-window, with iron bars and lozenge panes set in lead. By way of benches there was a plank fastened to the wall all round the room, while in the middle was a chair bereft of its straw, a black-board and a stick of chalk.

Morning and evening, at the sound of the bell, there came rushing in some fifty young imps who, having shown themselves hopeless dunces with their Cornelius Nepos, had been relegated, in the phrase of the day, to 'a few good years of French.' Those who had found mensa too much for them came to me to get a smattering of grammar. Children and strapping lads were there, mixed up together, at very different educational stages, but all incorrigibly agreed to play tricks upon the master, the boy master who was no older than some of them, or even younger.

To the little ones I gave their first lessons in reading; the intermediate ones I showed how they should hold their pen to write a few lines of dictation on their knees; to the big ones I revealed the secrets of fractions and even the mysteries of Euclid. And to keep this restless crowd in order, to give each mind work in accordance with its strength, to keep attention aroused and lastly to expel dullness from the gloomy room, whose walls dripped melancholy even more than dampness, my one resource was my tongue, my one weapon my stick of chalk.

For that matter, there was the same contempt in the other classes for all that was not Latin or Greek. One instance will be enough to show how things then stood with the teaching of physics, the science which occupies so large a place to-day. The principal of the college was a first-rate man, the worthy Abbe X., who, not caring to dispense beans and bacon himself, had left the commissariat-department to a relative and had undertaken to teach the boys physics.

Let us attend one of his lessons. The subject is the barometer. The establishment happens to possess one, an old apparatus, covered with dust, hanging on the wall beyond the reach of profane hands and bearing on its face, in large letters, the words stormy, rain, fair....