The Marx He Knew 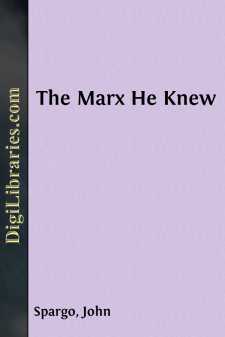 THE MARX HE KNEW I

The pale, yellow light of the waning day streamed through the dusty window panes of the little cigar shop, and across the bench where old Hans Fritzsche worked and hummed the melody of Der Freiheit the while.

The Young Comrade who sat in the corner upon a three-legged stool seemed not to hear the humming. His eyes were fixed upon a large photograph of a man which hung in a massive oak frame above the bench where Old Hans rolled cigars into shape. The photograph was old and faded, and the written inscription beneath it was scarcely legible. The gaze of the Young Comrade was wistful and reverent.

Old Hans stopped humming and looked at the Young Comrade. Then his eyes wandered to the portrait and rested upon it in a gaze that was likewise full of tender reverence.

Neither spoke again for several seconds and only the monotonous ticking of the clock upon the wall broke the oppressive silence.

"Ach! he was a wonderful man, my comrade," said Old Hans at length.

"Yes, yes, he was a wonderful man—one of the most wonderful men that ever lived," responded the Young Comrade in a voice that was vibrant with religious enthusiasm.

Both were silent again for a moment and then the Young Comrade continued: "Yes, Marx was a wonderful man, Hans. And you knew him—saw him smile—heard him speak—clasped his hand—called him comrade and friend!"

"Aye, many times, many times," answered Old Hans, nodding. "Hundreds of times did we smoke and drink together—me and him."

"Ah, that was a glorious privilege, Hans," said the Young Comrade fervently. "To hear him speak and touch his hand—the hand that wrote such great truths for the poor working people—I would have gladly died, Hans. Why, even when I touch your hand now, and think that it held his hand so often, I feel big—strong—inspired."

"Ach, but my poor old hand is nothing," answered Old Hans with a deprecating smile. "Touching the hand of such a man matters nothing at all, for genius is not contagious like the smallpox," he added.

"But tell me about him, Hans," pleaded the Young Comrade again. "Tell me how he looked and spoke—tell me everything."

"Well, you see, we played together as boys in the Old Country, in Treves. Many a time did we fight then! Once he punched my eye and made it swell up so that I could hardly see at all, but I punched his nose and made it bleed like—well, like a pig."

"What! you made him bleed?"

"Ach! that was not much; all boys fight so."

"My father was a shoemaker, you see, and we lived not far away from where Karl's people lived. Many a time my father sent me to their house—on the Bruckergrasse—with mended shoes. Then I would see Karl, who was just as big as I was, but not so old by a year. Such a fine boy! Curly-headed he was, and fat—like a little barrel almost.

"So, when I took the shoes sometimes I would stop and play with him a bit—play with Karl and the girls. He was always playing with girls—with his sister, Sophie, and little Jenny von Westphalen....