The Martyrs of Science, or, The lives of Galileo, Tycho Brahe, and Kepler 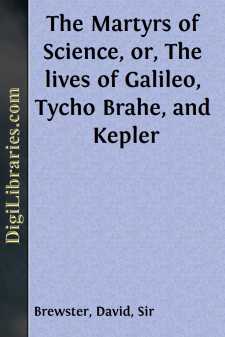 Peculiar interest attached to his Life—His Birth—His early studies—His passion for Mathematics—His work on the Hydrostatic Balance—Appointed Lecturer on Mathematics at Pisa—His antipathy to the Philosophy of Aristotle—His contentions with the Aristotelians—Chosen professor of Mathematics in Padua—Adopts the Copernican system, but still teaches the Ptolemaic doctrine—His alarming illness—He observes the new Star in 1604—His magnetical experiments.

The history of the life and labours of Galileo is pregnant with a peculiar interest to the general reader, as well as to the philosopher. His brilliant discoveries, the man of science regards as his peculiar property; the means by which they were made, and the development of his intellectual character, belong to the logician and to the philosopher; but the triumphs and the reverses of his eventful life must be claimed for our common nature, as a source of more than ordinary instruction.

The lengthened career which Providence assigned to Galileo was filled up throughout its rugged outline with events even of dramatic interest. But though it was emblazoned with achievements of transcendent magnitude, yet his noblest discoveries were the derision of his contemporaries, and were even denounced as crimes which merited the vengeance of Heaven. Though he was the idol of his friends, and the favoured companion of princes, yet he afterwards became the victim of persecution, and spent some of his last hours within the walls of a prison; and though the Almighty granted him, as it were, a new sight to descry unknown worlds in the obscurity of space, yet the eyes which were allowed to witness such wonders, were themselves doomed to be closed in darkness.

Such were the lights and shadows in which history delineates

“The starry Galileo with his woes.”

But, however powerful be their contrasts, they are not unusual in their proportions. The balance which has been struck between his days of good and evil, is that which regulates the lot of man, whether we study it in the despotic sway of the autocrat, in the peaceful inquiries of the philosopher, or in the humbler toils of ordinary life.

Galileo Galilei was born at Pisa, on the 15th of February, 1564, and was the eldest of a family of three sons and three daughters. Under the name of Bonajuti, his noble ancestors had filled high offices at Florence; but about the middle of the 14th century they seem to have abandoned this surname for that of Galileo. Vincenzo Galilei, our author’s father, was himself a philosopher of no mean powers; and though his talents seem to have been exercised only in the composition of treatises on the theory and practice of music, yet he appears to have anticipated even his son in a just estimate of the philosophy of the age, and in a distinct perception of the true method of investigating truth.

The early years of Galileo were, like those of almost all great experimental philosophers, spent in the construction of instruments and pieces of machinery, which were calculated chiefly to amuse himself and his schoolfellows. This employment of his hands, however, did not interfere with his regular studies; and though, from the straitened circumstances of his father, he was educated under considerable disadvantages, yet he acquired the elements of classical literature, and was initiated into all the learning of the times. Music, drawing, and painting were the occupations of his leisure hours; and such was his proficiency in these arts, that he was reckoned a skilful performer on several musical instruments, especially the lute; and his knowledge of pictures was held in great esteem by some of the best artists of his day.

Galileo seems to have been desirous of following the profession of a painter: but his father had observed decided indications of early genius; and, though by no means able to afford it, he resolved to send him to the university to pursue the study of medicine....