The Mariner of St. Malo : A chronicle of the voyages of Jacques Cartier 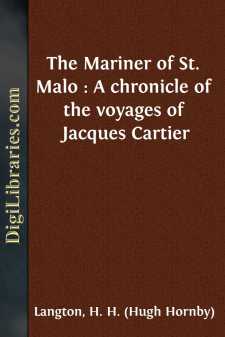 In the town hall of the seaport of St Malo there hangs a portrait of Jacques Cartier, the great sea-captain of that place, whose name is associated for all time with the proud title of 'Discoverer of Canada.' The picture is that of a bearded man in the prime of life, standing on the deck of a ship, his bent elbow resting upon the gunwale, his chin supported by his hand, while his eyes gaze outward upon the western ocean as if seeking to penetrate its mysteries. The face is firm and strong, with tight-set jaw, prominent brow, and the full, inquiring eye of the man accustomed both to think and to act. The costume marks the sea-captain of four centuries ago. A thick cloak, gathered by a belt at the waist, enwraps the stalwart figure. On his head is the tufted Breton cap familiar in the pictures of the days of the great navigators. At the waist, on the left side, hangs a sword, and, on the right, close to the belt, the dirk or poniard of the period.

How like or unlike the features of Cartier this picture in the town hall may be, we have no means of telling. Painted probably in 1839, it has hung there for more than seventy years, and the record of the earlier prints or drawings from which its artist drew his inspiration no longer survives. We know, indeed, that an ancient map of the eastern coast of America, made some ten years after the first of Cartier's voyages, has pictured upon it a group of figures that represent the landing of the navigator and his followers among the Indians of Gaspe. It was the fashion of the time to attempt by such decorations to make maps vivid. Demons, deities, mythological figures and naked savages disported themselves along the borders of the maps and helped to decorate unexplored spaces of earth and ocean. Of this sort is the illustration on the map in question. But it is generally agreed that we have no right to identify Cartier with any of the figures in the scene, although the group as a whole undoubtedly typifies his landing upon the seacoast of Canada.

There is rumour, also, that the National Library at Paris contains an old print of Cartier, who appears therein as a bearded man passing from the prime of life to its decline. The head is slightly bowed with the weight of years, and the face is wanting in that suggestion of unconquerable will which is the dominating feature of the portrait of St Malo. This is the picture that appears in the form of a medallion, or ring-shaped illustration, in more than one of the modern works upon the great adventurer. But here again we have no proofs of identity, for we know nothing of the origin of the portrait.

Curiously enough an accidental discovery of recent years seems to confirm in some degree the genuineness of the St Malo portrait. There stood until the autumn of 1908, in the French-Canadian fishing village of Cap-des-Rosiers, near the mouth of the St Lawrence, a house of very ancient date. Precisely how old it was no one could say, but it was said to be the oldest existing habitation of the settlement....