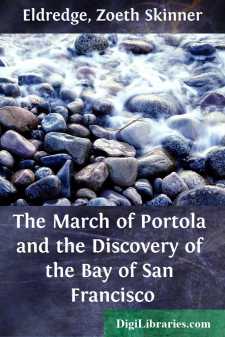 In the annals of adventure, there are no more thrilling narratives of heroic perseverance in the performance of duty than the record of Spanish exploration in America. To those of us who have come into possession of the fair land opened up by them, the story of their travels and adventures have the most profound interest. The account of the expedition of Portolá has never been properly presented. Many writers have touched on it, and H. H. Bancroft, in his History of California, gives a brief digest of Crespi's diary. Most writers on California history have drawn on Palou's Vida del V. P. F. Junipero Serra and Noticias de la Nueva California, and without looking further, have accepted the ecclesiastical narrative. We have endeavored in this sketch to give, in a clear and concise form, the conditions which preceded and led up to the occupation of California.

The importance of California in relation to the control of the Pacific was early recognized by the great European powers, some of whom had but small respect for the Bull of Pope Alexander VI dividing the New World between Spain and Portugal. England, France, and Russia sent repeated expeditions into the Pacific. In 1646 the British Admiralty sent two ships to look in Hudson's Bay for a northwest passage to the South Sea, one of which bore the significant name of California. The voyage of Francis Drake, 1577-1580, was a private venture, but at Drake's Bay he proclaimed the sovereignty of Elizabeth, and named the country New Albion. Two hundred years later (1792-1793) Captain George Vancouver explored the coast of California down to thirty degrees of north latitude (Ensenada de Todos Santos), which, he says, "is the southernmost limit of New Albion, as discovered by Sir Francis Drake, or New California, as the Spaniards frequently call it." Even after the occupation and settlement by the Spaniards, so feeble were their establishments that, as Vancouver reports to the Admiralty, it would take but a small force to wrest from Spain this most valuable possession. But though the growing feebleness of Spain presaged the time when her hold upon America would be loosened, the standard of individual heroism was not lowered, and the achievements of Portolá and of Anza rank with those of De Soto and Coronado. The California explorer did not, it is true, have to fight his way through hordes of fierce natives. The California Indians, as a rule, received the white adventurers gladly, and entertained them with such hospitality as they had to offer, but the Indians north of the Santa Barbara Channel were but a poor lot. In a country abounding in game of all kinds, a sea swarming with fish, a soil capable of growing every character of foodstuff, these miserable natives lived in a chronic state of starvation.

As in heroic qualities, so also in skill and judgment, Portolá upholds the best traditions of Spain. The success of an expedition depends upon the character of the leader. Pánfilo de Narváez landed on the coast of Florida in April, 1528, with a well-equipped army of three hundred men and forty horses, just half the force he sailed with from Spain the previous June, and of the three hundred men whom he led into Florida, only four lived to reach civilization—the rest perished....