The Map of Life Conduct and Character 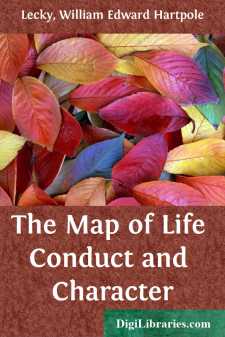 One of the first questions that must naturally occur to every writer who deals with the subject of this book is, what influence mere discussion and reasoning can have in promoting the happiness of men. The circumstances of our lives and the dispositions of our characters mainly determine the measure of happiness we enjoy, and mere argument about the causes of happiness and unhappiness can do little to affect them. It is impossible to read the many books that have been written on these subjects without feeling how largely they consist of mere sounding generalities which the smallest experience shows to be perfectly impotent in the face of some real and acute sorrow, and it is equally impossible to obtain any serious knowledge of the world without perceiving that a large proportion of the happiest lives and characters are to be found where introspection, self-analysis and reasonings about the good and evil of life hold the smallest place. Happiness, indeed, like health, is one of the things of which men rarely think except when it is impaired, and much that has been written on the subject has been written under the stress of some great depression. Such writers are like the man in Hogarth's picture occupying himself in the debtors' prison with plans for the payment of the National Debt. There are moments when all of us feel the force of the words of Voltaire: 'Travaillons sans raisonner, c'est le seul moyen de rendre la vie supportable.'

That there is much truth in such considerations is incontestable, and it is only within a restricted sphere that the province of reasoning extends. Man comes into the world with mental and moral characteristics which he can only very imperfectly influence, and a large proportion of the external circumstances of his life lie wholly or mainly beyond his control. At the same time, every one recognises the power of skill, industry and perseverance to modify surrounding circumstances; the power of temperance and prudence to strengthen a naturally weak constitution, prolong life, and diminish the chances of disease; the power of education and private study to develop, sharpen and employ to the best advantage our intellectual faculties. Every one also recognises how large a part of the unhappiness of most men may be directly traced to their own voluntary and deliberate acts. The power each man possesses in the education and management of his character, and especially in the cultivation of the dispositions and tendencies which most largely contribute to happiness, is less recognised and is perhaps less extensive, but it is not less real.

The eternal question of free will and determinism here naturally meets us, but on such a subject it is idle to suppose that a modern writer can do more than define the question and state his own side. The Determinist says that the real question is not whether a man can do what he desires, but whether he can do what he does not desire; whether the will can act without a motive; whether that motive can in the last analysis be other than the strongest pleasure. The illusion of free will, he maintains, is only due to the conflict of our motives. Under many forms and disguises pleasure and pain have an absolute empire over conduct. The will is nothing more than the last and strongest desire; or it is like a piece of iron surrounded by magnets and necessarily drawn by the most powerful; or (as has been ingeniously imagined) like a weathercock, conscious of its own motion, but not conscious of the winds that are moving it. The law of compulsory causation applies to the world of mind as truly as to the world of matter. Heredity and Circumstance make us what we are. Our actions are the inevitable result of the mental and moral constitutions with which we came into the world, operated on by external influences.

The supporters of free will, on the other hand, maintain that it is a fact of consciousness that there is a clear distinction between the Will and the Desires, and that although they are closely connected no sound analysis will confuse them. Coleridge ingeniously compared their relations to 'the co-instantaneous yet reciprocal action of the air and the vital energy of the lungs in breathing.' If the will is powerfully acted on by the desires, it has also in its turn a power of acting upon them, and it is not a mere slave to pleasure and pain....