The Manual of Heraldry; Fifth Edition Being a Concise Description of the Several Terms Used, and Containing a Dictionary of Every Designation in the Science 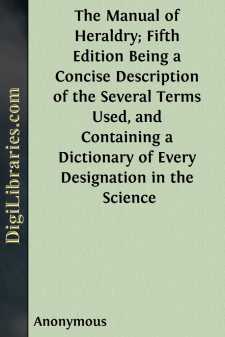 CHAPTER I. ORIGIN OF COATS OF ARMS.

Heraldry is the science which teaches how to blazon or describe in proper terms armorial bearings and their accessories.

Many volumes have been written on the origin of Heraldry and even on the antiquity of separate charges contained in an escutcheon: it would be filling the pages of an elementary work on Heraldry to little purpose to enter upon an inquiry as to the exact period of the introduction of an art that has existed in some degree in all countries whose inhabitants have emerged from barbarism to civilization. In all ages men have made use of figures of living creatures, trees, flowers, and inanimate objects, as symbolical signs to distinguish themselves in war, or denote the bravery and courage of their chief or nation.

The allegorical designs emblazoned on the standards, shields, and armour of the Greeks and Romans—the White Horse of the Saxons, the Raven of the Danes, and the Lion of the Normans, may all be termed [Page 2] heraldic devices; but according to the opinions of Camden, Spelman, and other high authorities, hereditary arms of families were first introduced at the commencement of the twelfth century. When numerous armies engaged in the expeditions to the Holy Land, consisting of the troops of twenty different nations, they were obliged to adopt some ensign or mark in order to marshal the vassals under the banners of the various leaders. The regulation of the symbols whereby the Sovereigns and Lords of Europe should be distinguished, all of whom were ardent in maintaining the honour of the several nations to which they belonged, was a matter of great nicety, and it was properly entrusted to the Heralds who invented signs of honour which could not be construed into offence, and made general regulations for their display on the banners and shields of the chiefs of the different nations. The ornaments and regulations were sanctioned by the sovereigns engaged in the Crusade, and hence the origin of the present system of Heraldry, which prevails with trifling variations in every kingdom of Europe.

The passion for military fame which prevailed at this period led to the introduction of mock battles, called Tournaments. Here the Knights appeared with the Heraldic honours conferred upon them for deeds of prowess in actual battle. All were emulous of such distinctions. The subordinate followers appeared with the distinctive arms of their Lord, with the addition of some mark denoting inferiority. These marks of honour at first were merely pieces of stuff of various colours cut into strips and sewn on the surcoat or garment worn over armour, to protect it from the effect of exposure to the atmosphere. These strips were disposed in various ways, and gave the idea of the chief, bend, chevron, &c. [Page 3] Figures of animals and other objects were gradually introduced; and as none could legally claim or use those honourable distinctions unless they were granted by the Kings of Arms, those Heraldic sovereigns formed a code of laws for the regulation of titles and insignia of honour, which the Sovereigns and Knights of Europe have bound themselves to protect; and those rules constitute the science of Heraldry which forms the subject of the following pages.