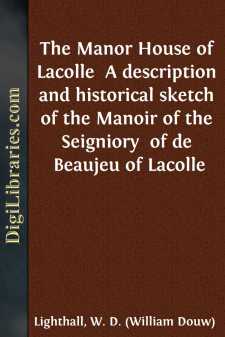 THE MANOR HOUSE OF LACOLLE. BY W.D. LIGHTHALL, K.C.

The Manor House of the Seigniory of Lacolle or De Beaujeu is situated in a retired neighborhood, on the New York State border-line about four miles south-west of Lacolle Village, and one mile north of the village of Champlain, N.Y. and about forty miles from Montreal. The highway from Lacolle to Champlain runs through the property. The traveller from the north finds himself entering well-wooded lands and at length passes the heavy low stone-walls and large, white gate of the grounds and sees the home nearby on a slight elevation to the right. A sloping lawn and old trees extend in front, the gardens are at the north-side, and a hundred yards further, a wooded park of about a hundred acres. On the-opposite, or west, side of the road, the tall old elm grove forms part of a hillside farm. The Manorhouse itself is large, constructed of wood, and having an extensive stone gabled wing, the whole ornamented with vines. In front, six tall, slender, fluted pillars with Ionic capitals give Colonial character to the verandah and meet the roof above the second story. The massive oak front door is divided into an upper and lower half, with large brass knocker. The interior is mostly finished in polished hard woods, with broad fire-places and colonial mantels in most of the rooms. The main part of the house was built in 1825 by Mrs. Henry Hoyle, formerly Mrs. Major Henry Ten Eyck Schuyler, of Troy, N.Y., under the following circumstances:

As Sarah Visscher she had inherited a large fortune from her grand-uncle Lieutenant-General Garret Fisher (Visscher), a Loyalist officer of Sir Adolphus Oughton's regiment, the 55th, which was present at the taking of Montreal, and who died at Manchester Square, London, in 1808, after a distinguished career. This fortune arrived at the beginning of the war of 1812, just before the death of her first husband Major Schuyler, nephew of General Philip Schuyler, and descendant of the well-known colonial military family of that name. He left three daughters and a son. They possessed other very valuable property in Troy, including a handsome farm and mansion at the South end, shown in old pictures of the city, on which about a fourth of Troy was afterwards built. In 1816, Henry Hoyle, who was a Lancashire man, married her for her fortune, which he soon found belonged to the children by strict law. He therefore, making great pretensions of fatherly kindness, and religion, set himself to defeat their title. By falsifying the facts, he managed to obtain a snap judgment against their guardian in favor of himself, but feeling his tenure insecure, sold the mansion and farm in Troy, and persuaded his wife to move to the property in Lacolle, just on the frontier line. It was only after his death in 1849, that the widow and orphans discovered his fraud, and that he had obtained the placing of the entire property in his own name in order to possess it. There followed a furious family quarrel between the Schuyler and Hoyle heirs, in which the old lady took the side of the former, and in fact sued her Hoyle sons to right the injury....