The Man Who Did Not Die The Story of Elijah 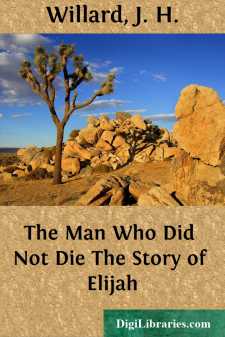 THE MAN WHO DID NOT DIE.

AFTER the death of King Solomon, his son Rehoboam became ruler of the Israelites. The prodigality and magnificence of Solomon's court, and his lavish way of living had been met by heavy taxation. Seeing the vast revenues of the kingdom employed in this way, the people had grown discontented, and then disloyal.

After Rehoboam had become king, the Israelites appealed to him to lighten the taxes and other heavy burdens which oppressed the poor. Instead of following the advice of his older counsellors, and releasing the people from some of their burdens, the new king hearkened to the counsel of the younger men who had grown up with him and scornfully rejected the petition of his subjects.

THE KING SCORNFULLY REJECTED THEIR PETITION.

A very ambitious man named Jeroboam presented the petition to Rehoboam, and upon its rejection, ten tribes revolted and made Jeroboam their ruler under the title of King of Israel.

The remainder of the Israelitish nation from this time were known as the Kingdom of Judah. Jerusalem remained its capital, and God was worshipped in the magnificent temple built by King Solomon. It also maintained the regular priesthood, its officers descending as formerly from father to son.

Among the twenty sovereigns of Judah, there were a few who served God sincerely. The best four of the kings were Asa, Jehosaphat, Hezekiah and Josiah. Asa fought against the worship of idols which had corrupted the people, yet he made an alliance with the King of Syria, who was an idolater. Jehosaphat, his son, ruled the kingdom of Judah for twenty- five years, and, although he did not always do right, his reign was a quiet one.

ASA READ THE LAW OF GOD TO THE PEOPLE.

Hezekiah waged a vigorous war against the worship of idols, and, as far as he was able, restored the worship of God in the temple. The Bible says of everything he undertook for the glory of God that "he did it with all his heart, and prospered."

HEZEKIAH DESTROYED THE IDOLS IN THE TEMPLE.

Hezekiah was a very brave man, and when Sennacherib, the King of Assyria, sent an army against Jerusalem, his speech to the people, telling them to be strong and courageous, for God would help them and fight for them, was not unlike that of Joshua when he exhorted the Israelites to trust in God, at the time when they were about to enter the land of Canaan.

The prophet Isaiah lived during the reign of Hezekiah. At one time when the king was very sick he prayed to God that his life might be spared. God told Isaiah to tell him that He had heard his prayer, and that He would heal him, and prolong his life for fifteen years.

When Isaiah had delivered God's message, Hezekiah asked for a sign that these things should be done, and Isaiah said that he might decide whether the shadow upon the sundial should go forward ten degrees or go backward ten degrees.

Hezekiah replied that it was an easy thing for the shadow to go forward ten degrees, and asked that it might go backwards. God moved the shadow as the king had asked, and he accepted it as a sign that his life was to be spared and his days lengthened.