The Man Upstairs and Other Stories 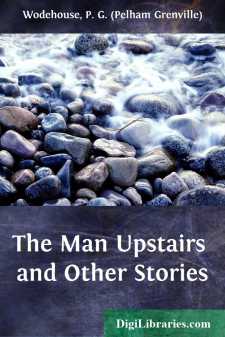 There were three distinct stages in the evolution of Annette Brougham's attitude towards the knocking in the room above. In the beginning it had been merely a vague discomfort. Absorbed in the composition of her waltz, she had heard it almost subconsciously. The second stage set in when it became a physical pain like red-hot pincers wrenching her mind from her music. Finally, with a thrill in indignation, she knew it for what it was—an insult. The unseen brute disliked her playing, and was intimating his views with a boot-heel.

Defiantly, with her foot on the loud pedal, she struck—almost slapped—the keys once more.

Annette rose. Her face was pink, her chin tilted. Her eyes sparkled with the light of battle. She left the room and started to mount the stairs. No spectator, however just, could have helped feeling a pang of pity for the wretched man who stood unconscious of imminent doom, possibly even triumphant, behind the door at which she was on the point of tapping.

Annette went in. The room was a typical Chelsea studio, scantily furnished and lacking a carpet. In the centre was an easel, behind which were visible a pair of trousered legs. A cloud of grey smoke was curling up over the top of the easel.

'I beg your pardon,' began Annette.

'I don't want any models at present,' said the Brute. 'Leave your card on the table.'

At this the Brute emerged from his fortifications and, removing his pipe from his mouth, jerked his chair out into the open.

How reckless is Nature in the distribution of her gifts! Not only had this black-hearted knocker on floors a pleasant voice, but, in addition, a pleasing exterior. He was slightly dishevelled at the moment, and his hair stood up in a disordered mop; but in spite of these drawbacks, he was quite passably good-looking. Annette admitted this. Though wrathful, she was fair.

'I thought it was another model,' he explained. 'They've been coming in at the rate of ten an hour ever since I settled here. I didn't object at first, but after about the eightieth child of sunny Italy had shown up it began to get on my nerves.'

Annette waited coldly till he had finished.

'I am sorry,' she said, in a this-is-where-you-get-yours voice, 'if my playing disturbed you.'

One would have thought nobody but an Eskimo wearing his furs and winter under-clothing could have withstood the iciness of her manner; but the Brute did not freeze.

'I am sorry,' repeated Annette, well below zero, 'if my playing disturbed you. I live in the room below, and I heard you knocking.'

'Then why knock on the floor?' said Annette, turning to go. 'It is so bad for my ceiling,' she said over shoulder. 'I thought you would not mind my mentioning it....