The Man Thou Gavest 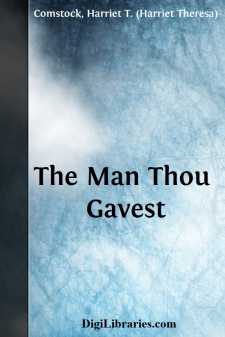 The passengers, one by one, left the train but Truedale took no heed. He was the only one left at last, but he was not aware of it, and then, just as the darkness outside caught his attention, the train stopped so suddenly that it nearly threw him from his seat.

“Accident?” he asked the conductor. “No, sah! Pine Cone station. I reckon the engineer come mighty nigh forgetting—he generally does at the end. The tracks stop here. You look mighty peaked; some one expecting yo’?”

“I’ve been ill. My doctor ordered me to the hills. Yes: some one will meet me.” Truedale did not resent the interest the man showed; he was grateful.

“Well, sah, if yo’ man doesn’t show up—an’ sometimes they don’t, owing to bad roads—you can come back with us after we load up with the wood. I live down the track five miles; we lie thar fur the night. Yo’ don’t look equal to taking to yo’ two standing feet.”

The entire train force of three men went to gather fuel for the return trip and, dejectedly, Truedale sat down in the gloom and silence to await events.

No human being materialized and Truedale gave himself up to gloomy thoughts. Evidently he must return on the train and to-morrow morning take to—just then a spark like a falling star attracted his attention and to his surprise he saw, not a dozen feet away, a tall lank man leaning against a tree in an attitude so adhesive that he might have been a fungus growth or sprig of destroying mistletoe. It never occurred to Truedale that this indifferent onlooker could be interested in him, but he might be utilized in the emergency, so he saluted cordially.

By the upward and downward curve of the glowing pipe bowl, Truedale concluded the man was nodding.

“So?” The one word came through the darkness without interest.

“Do you happen to know him?”

“Could you—get me to his place?”

“I—I had a trunk sent on ahead; perhaps it is in that shed?”

“It’s up to—to Jim’s place. Can you ride behind me on the mare? Travelling is tarnation bad.”

Once they were on the mare’s back, conversation dragged, then died a natural death. Truedale felt as if he were living a bit of anti-war romance as he jogged along behind his guide, his grip knocking unpleasantly against his leg as the way got rougher.

It was nine o’clock when, in a little clearing close by the trail, the lights of a cabin shone cheerily and the mare stopped short and definitely.

“I hope White is at home!” Truedale was worn to the verge of exhaustion.

“I be Jim White!” The man dismounted and stood ready to assist his guest.

“Welcome, stranger. Any one old Doc McPherson sends here brings his welcome with him.”

About a fortnight later, Conning Truedale stretched his long legs out toward Jim White’s roaring fire of pine knots and cones. It was a fierce and furious fire but the night was sharp and cold....