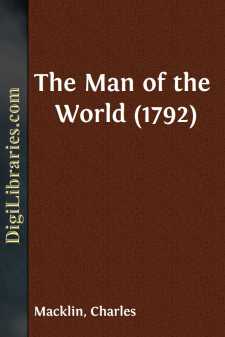 During his extraordinarily long career as an actor, Charles Macklin wrote several plays. The earliest is King Henry VII; or, The Popish Imposter, a tragedy based on the Perkin Warbeck story, performed at Drury Lane 18 January 1745/6 and published the same year. As the Preface states, it "was design'd as a Kind of Mirror to the present Rebellion"; and it provided the author with a part in which he could express, through the character of Lord Huntley, his own aversion to foreign influences in the land, to "French and Priest-rid Weakness" and "Romish Tyranny." This and his succeeding plays were obviously composed to provide parts for himself; so no others were published until he had retired. They were his stock in trade, since Macklin seldom maintained a stable connection with one of the theatres. Instead he appeared now here now there for brief engagements or on special occasions, rather than as a regular member of the company, often carrying his plays with him. Thus a number have survived only in manuscript. The Larpent Collection contains seven,—the tragedy just mentioned, four farces, and two five-act comedies, one of these in three states.[1] This is The Man of the World here reproduced for the first time in over a century and a half, despite the opinion expressed by Isaac Reed, in 1782, that "This play, … in respect to originality, force of mind, and well-adapted satire, may dispute the palm with any dramatic piece that has appeared within the compass of half a century…."[2] Originally it had been performed in Dublin in 1764 under the title The True-born Scotchman, but in 1770 the Examiner of Plays in London refused to license it. It was re-submitted in 1779 and again forbidden, but was finally allowed and performed at Covent Garden on 10 May 1781, with the author in the part of Sir Pertinax Macsycophant.

Himself irascible and passionate, Macklin had been the most admired Shylock of his century. His specialty was the performance of character parts, often dialect roles, either broadly comic or cruel and ironic. The central figure of this, his best comedy, is such a part. It combines those features that the author could portray so effectively, the broad dialect, the callous selfishness, the hypocrisy, the passionate resistance to all appeals to sentiment and the imperviousness to affection. One can detect in the creation strong resemblances to Macklin's interpretation of Shylock, something of Sir Giles Overreach, who was also known to eighteenth-century play-goers, and possibly of Tartuffe. In his resolute defiance of the conventions of comedy of sensibility, Macklin resisted the pressure to allow Sir Pertinax to soften in the end and terminate the play on a note of happy reconciliation and family harmony.

In thus preserving the toughness of Sir Pertinax consistently to the end, Macklin remained true to the tradition of critical, satiric comedy that he had been bred in but that by this time had almost disappeared. Protesting against the refusal of a license for his play, in 1779, Macklin composed a defense of satiric comedy....