The Malay Archipelago, the land of the orang-utan and the bird of paradise; a narrative of travel, with studies of man and nature - Volume 2 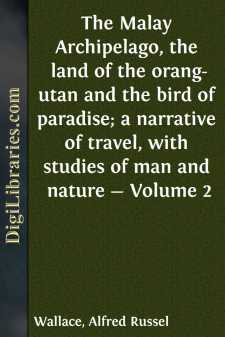 ON the morning of the 8th of January, 1858, I arrived at Ternate, the fourth of a row of fine conical volcanic islands which shirt the west coast of the large and almost unknown island of Gilolo. The largest and most perfectly conical mountain is Tidore, which is over four thousand Feet high—Ternate being very nearly the same height, but with a more rounded and irregular summit. The town of Ternate is concealed from view till we enter between the two islands, when it is discovered stretching along the shore at the very base of the mountain. Its situation is fine, and there are grand views on every side. Close opposite is the rugged promontory and beautiful volcanic cone of Tidore; to the east is the long mountainous coast of Gilolo, terminated towards the north by a group of three lofty volcanic peaks, while immediately behind the town rises the huge mountain, sloping easily at first and covered with thick groves of fruit trees, but soon becoming steeper, and furrowed with deep gullies. Almost to the summit, whence issue perpetually faint wreaths of smoke, it is clothed with vegetation, and looks calm and beautiful, although beneath are hidden fires which occasionally burst forth in lava-streams, but more frequently make their existence known by the earthquakes which have many times devastated the town.

I brought letters of introduction to Mr. Duivenboden, a native of Ternate, of an ancient Dutch family, but who was educated in England, and speaks our language perfectly. He was a very rich man, owned half the town, possessed many ships, and above a hundred slaves. He was moreover, well educated, and fond of literature and science—a phenomenon in these regions. He was generally known as the king of Ternate, from his large property and great influence with the native Rajahs and their subjects. Through his assistance I obtained a house; rather ruinous, but well adapted to my purpose, being close to the town, yet with a free outlet to the country and the mountain. A few needful repairs were soon made, some bamboo furniture and other necessaries obtained, and after a visit to the Resident and Police Magistrate I found myself an inhabitant of the earthquake-tortured island of Ternate, and able to look about me and lay down the plan of my campaign for the ensuing year. I retained this house for three years, as I found it very convenient to have a place to return to after my voyages to the various islands of the Moluccas and New Guinea, where I could pack my collections, recruit my health, and make preparations for future journeys. To avoid repetitions, I will in this chapter combine what notes I have about Ternate.

A description of my house (the plan of which is here shown) will enable the reader to understand a very common mode of building in these islands. There is of course only one floor. The walls are of stone up to three feet high; on this are strong squared posts supporting the roof, everywhere except in the verandah filled in with the leaf-stems of the sago-palm, fitted neatly in wooden owing....