The Malay Archipelago, the land of the orang-utan and the bird of paradise; a narrative of travel, with studies of man and nature - Volume 1 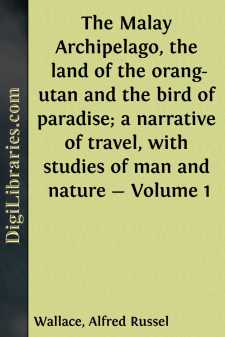 From a look at a globe or a map of the Eastern hemisphere, we shall perceive between Asia and Australia a number of large and small islands forming a connected group distinct from those great masses of land, and having little connection with either of them. Situated upon the Equator, and bathed by the tepid water of the great tropical oceans, this region enjoys a climate more uniformly hot and moist than almost any other part of the globe, and teems with natural productions which are elsewhere unknown. The richest of fruits and the most precious of spices are Indigenous here. It produces the giant flowers of the Rafflesia, the great green-winged Ornithoptera (princes among the butterfly tribes), the man-like Orangutan, and the gorgeous Birds of Paradise. It is inhabited by a peculiar and interesting race of mankind—the Malay, found nowhere beyond the limits of this insular tract, which has hence been named the Malay Archipelago.

To the ordinary Englishman this is perhaps the least known part of the globe. Our possessions in it are few and scanty; scarcely any of our travellers go to explore it; and in many collections of maps it is almost ignored, being divided between Asia and the Pacific Islands. It thus happens that few persons realize that, as a whole, it is comparable with the primary divisions of the globe, and that some of its separate islands are larger than France or the Austrian Empire. The traveller, however, soon acquires different ideas. He sails for days or even weeks along the shores of one of these great islands, often so great that its inhabitants believe it to be a vast continent. He finds that voyages among these islands are commonly reckoned by weeks and months, and that their several inhabitants are often as little known to each other as are the native races of the northern to those of the southern continent of America. He soon comes to look upon this region as one apart from the rest of the world, with its own races of men and its own aspects of nature; with its own ideas, feelings, customs, and modes of speech, and with a climate, vegetation, and animated life altogether peculiar to itself.

From many points of view these islands form one compact geographical whole, and as such they have always been treated by travellers and men of science; but, a more careful and detailed study of them under various aspects reveals the unexpected fact that they are divisible into two portions nearly equal in extent which differ widely in their natural products, and really form two parts of the primary divisions of the earth. I have been able to prove this in considerable detail by my observations on the natural history of the various parts of the Archipelago; and, as in the description of my travels and residence in the several islands I shall have to refer continually to this view, and adduce facts in support of it, I have thought it advisable to commence with a general sketch of the main features of the Malayan region as will render the facts hereafter brought forward more interesting, and their bearing upon the general question more easily understood....