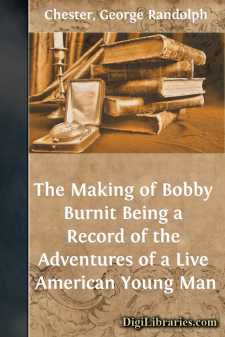 CHAPTER IBOBBY MAKES SOME IMPORTANT PREPARATIONS FOR A COMMERCIAL LIFE

“I am profoundly convinced that my son is a fool,” read the will of old John Burnit. “I am, however, also convinced that I allowed him to become so by too much absorption in my own affairs and too little in his, and, therefore, his being a fool is hereditary; consequently, I feel it my duty, first, to give him a fair trial at making his own way, and second, to place the balance of my fortune in such trust that he can not starve. The trusteeship is already created and the details are nobody’s present business. My son Robert will take over the John Burnit Store and personally conduct it, as his only resource, without further question as to what else I may have left behind me. This is my last will and testament.”

That is how cheerful Bobby Burnit, with no thought heretofore above healthy amusements and Agnes Elliston, suddenly became a business man, after having been raised to become the idle heir to about three million. Of course, having no kith nor kin in all this wide world, he went immediately to consult Agnes. It is quite likely that if he had been supplied with dozens of uncles and aunts he would have gone first to Agnes anyhow, having a mighty regard for her keen judgment, even though her clear gaze rested now and then all too critically upon himself. Just as he came whirling up the avenue he saw Nick Allstyne’s white car, several blocks ahead of him, stop at her door, and a figure which he knew must be Nick jump out and trip up the steps. Almost immediately the figure came down again, much more slowly, and climbed into the car, which whizzed away.

“Not at home,” grumbled Bobby.

It was like him, however, that he should continue straight to the quaint old house of the Ellistons and proffer his own card, for, though his aims could seldom be called really worth while, he invariably finished the thing he set out to do. It seemed to be a sort of disease. He could not help it. To his surprise, the Cerberus who guarded the Elliston door received him with a smile and a bow, and observed:

“Miss Elliston says you are to walk right on up to the Turkish alcove, sir.”

While Wilkins took his hat and coat Bobby paused for a moment figuratively to hug himself. At home to no one else! Expecting him!

“I’ll ask her again,” said Bobby to himself with determination, and stalked on up to the second floor hall, upon which opened a delightful cozy corner where Aunt Constance Elliston permitted the more “family-like” male callers to smoke and loll and be at mannish ease.

As he reached the landing the door of the library below opened, and in it appeared Agnes and an unusually well-set-up young man—a new one, who wore a silky mustache and most fastidious tailoring. The two were talking and laughing gaily as the door opened, but as Agnes glanced up and saw Bobby she suddenly stopped laughing, and he almost thought that he overheard her say something in an aside to her companion....