The Making of Arguments 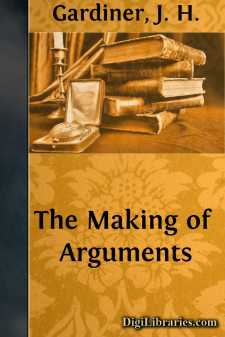 CHAPTER I WHAT WE ARGUE ABOUT, AND WHY

1. What Argument is. When we argue we write or speak with an active purpose of making other people take our view of a case; that is the only essential difference between argument and other modes of writing. Between exposition and argument there is no certain line. In Professor Lamont's excellent little book, "Specimens of Exposition," there are two examples which might be used in this book as examples of argument; in one of them, Huxley's essay on "The Physical Basis of Life," Huxley himself toward the end uses the words, "as I have endeavored to prove to you"; and Matthew Arnold's essay on "Wordsworth" is an elaborate effort to prove that Wordsworth is the greatest English poet after Shakespeare and Milton. Or, to take quite different examples, in any question of law where judges of the court disagree, as in the Income Tax Case, or in the Insular cases which decided the status of Porto Rico and the Philippines, both the majority opinion and the dissenting opinions of the judges are argumentative in form; though the majority opinion, at any rate, is in theory an exposition of the law. The real difference between argument and exposition lies in the difference of attitude toward the subject in hand: when we are explaining we tacitly assume that there is only one view to be taken of the subject; when we argue we recognize that other people look on it differently. And the differences in form are only those which are necessary to throw the critical points of an argument into high relief and to warm the feelings of the readers.

2. Conviction and Persuasion. This active purpose of making other people take your view of the case in hand, then, is the distinguishing essence of argument. To accomplish this purpose you have two tools or weapons, or perhaps one should say two sides to the same weapon, conviction and persuasion. In an argument you aim in the first place to make clear to your audience that your view of the case is the truer or sounder, or your proposal the more expedient; and in most arguments you aim also so to touch the practical or moral feelings of your readers as to make them more or less warm partisans of your view. If you are trying to make some one see that the shape of the hills in New England is due to glacial action, you never think of his feelings; here any attempt at persuading him, as distinguished from convincing him, would be an impertinence. On the other hand, it would be a waste of breath to convince a man that the rascals ought to be turned out, if he will not on election day take the trouble to go out and vote; unless you have effectively stirred his feelings as well as convinced his reason you have gained nothing. In the latter case your argument would be almost wholly persuasive, in the former almost wholly a matter of convincing.