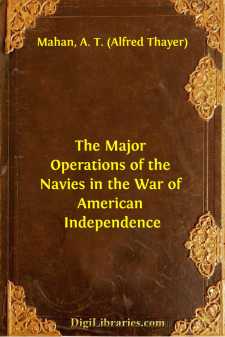 CHAPTER I THE NAVAL CAMPAIGN ON LAKE CHAMPLAIN1775-1776

Deducible then from Reason and from Experience

Consequent Necessity to the Americans of a Counterpoise to British Navy

This obtained through Burgoyne's Surrender

The Surrender of Burgoyne traceable directly to the Naval Campaigns on Lake Champlain, 1775, 1776

Invasion of Canada by Montgomery, 1775

Arnold marches through Maine Wilderness and joins Montgomery before Quebec

Assault on Quebec. Failure, and Death of Montgomery

Relief of the Place by British Navy

Arnold's Schemes and Diligence to create a Lake Navy, 1776

Difficulties to be overcome

Superior Advantages of the British

The British by building acquire Superiority, but too late for effect in 1776

Ultimate Consequences from this Retardation

Constitution of the Naval Force raised by Arnold

He moves with it to the foot of Lake Champlain

Constitution of the British Lake Navy

Land Forces of the Opponents

Naval Forces of the Two at the Battle of Valcour Island

Magnitude of the Stake at Issue

Advance of the British

Arnold's Disposition of his Flotilla to receive Attack

The Battle of Valcour Island

Pursuit by the British

Destruction of the American Vessels

British Appreciation of the Importance of the Action, as shown

Criticism of the conduct of the Opposing Leaders

End of the Naval Story of the Lakes

Effect of the Campaign upon the Decisive Events of 1777

Necessity that Force, if resorted to, be from the first Adequate

To the Monroe Doctrine

Failure of the British Government of 1775 in this respect

Consequences of such failure

General Howe evacuates Boston and retires to Halifax. Extent of his Command

Dissemination of Effort by British Government

The Battle of Fort Moultrie

Failure of the Attack. British Losses

The Expedition retires to New York

The Howes, Admiral and General, arrive in New York Bay

Operations about the City

Continuous and Decisive, but Inconspicuous, Part played by the British Navy

Crucial Weakness of the Scheme

The Advance of the British

Washington withdraws his Army from the Brooklyn side

Success of this Withdrawal due to British Negligence

Subsequent Operations, and Retreat of Washington to New Jersey

Retreat continued to Pennsylvania, where he receives reinforcements