The Mahatma and the Hare 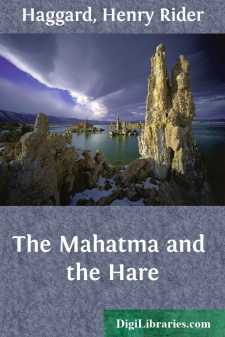 THE MAHATMA* [*] Mahatma, "great-souled." "One of a class of persons withpreter-natural powers, imagined to exist in India andThibet."—New English Dictionary.

Everyone has seen a hare, either crouched or running in the fields, or hanging dead in a poulterer's shop, or lastly pathetic, even dreadful-looking and in this form almost indistinguishable from a skinned cat, on the domestic table. But not many people have met a Mahatma, at least to their knowledge. Not many people know even who or what a Mahatma is. The majority of those who chance to have heard the title are apt to confuse it with another, that of Mad Hatter.

This is even done of malice prepense (especially, for obvious reasons, if a hare is in any way concerned) in scorn, not in ignorance, by persons who are well acquainted with the real meaning of the word and even with its Sanscrit origin. The truth is that an incredulous Western world puts no faith in Mahatmas. To it a Mahatma is a kind of spiritual Mrs. Harris, giving an address in Thibet at which no letters are delivered. Either, it says, there is no such person, or he is a fraudulent scamp with no greater occult powers—well, than a hare.

I confess that this view of Mahatmas is one that does not surprise me in the least. I never met, and I scarcely expect to meet, an individual entitled to set "Mahatma" after his name. Certainly I have no right to do so, who only took that title on the spur of the moment when the Hare asked me how I was called, and now make use of it as a nom-de-plume. It is true there is Jorsen, by whose order, for it amounts to that, I publish this history. For aught I know Jorsen may be a Mahatma, but he does not in the least look the part.

Imagine a bluff person with a strong, hard face, piercing grey eyes, and very prominent, bushy eyebrows, of about fifty or sixty years of age. Add a Scotch accent and a meerschaum pipe, which he smokes even when he is wearing a frock coat and a tall hat, and you have Jorsen. I believe that he lives somewhere in the country, is well off, and practises gardening. If so he has never asked me to his place, and I only meet him when he comes to Town, as I understand, to visit flower-shows.

Then I always meet him because he orders me to do so, not by letter or by word of mouth but in quite a different way. Suddenly I receive an impression in my mind that I am to go to a certain place at a certain hour, and that there I shall find Jorsen. I do go, sometimes to an hotel, sometimes to a lodging, sometimes to a railway station or to the corner of a particular street and there I do find Jorsen smoking his big meerschaum pipe. We shake hands and he explains why he has sent for me, after which we talk of various things. Never mind what they are, for that would be telling Jorsen's secrets as well as my own, which I must not do.

It may be asked how I came to know Jorsen. Well, in a strange way. Nearly thirty years ago a dreadful thing happened to me. I was married and, although still young, a person of some mark in literature....