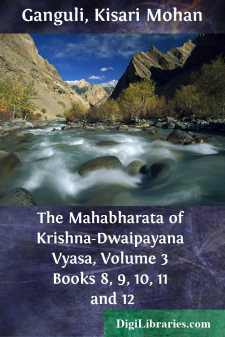 Om! Having bowed down unto Narayana, and unto that most exalted of male beings, Nara, and unto the goddess Sarasvati also, must the word Jaya be uttered.

Vaishampayana said, "After Drona had been slain, O monarch, the royal warriors (of the Kaurava army) headed by Duryodhana, with hearts filled with great anxiety, all repaired to Drona's son. Lamenting the loss of Drona, and deprived of energy in consequence of their cheerlessness, they sat around the son of Sharadvata's daughter, afflicted with grief. Comforted for a little while by considerations founded upon the scriptures, when night came, those rulers of Earth proceeded to their respective tents. Those lords of Earth, however, O thou of Kuru's race, could feel no happiness in their abodes. Thinking of that immense slaughter, they could not also sleep. The Suta's son (Karna), and king Suyodhana and Duhshasana and Shakuni, in special, could not compose themselves to sleep. Those four passed that night together in Duryodhana's tent, reflecting upon the woes they had inflicted upon the high-souled Pandavas. Formerly they had brought Draupadi, plunged into woe on account of the match at dice, into the assembly. Recollecting it they experienced great regret, their hearts being filled with anxiety. Thinking of those sufferings inflicted (upon the Pandavas) in consequence of the gambling match they passed that night in sorrow, O king, as if it were really a hundred years. Then when morning came, observing the dictates of the ordinance, all of them duly went through the customary rites. Having gone through these customary rites, and comforted to some extent, O Bharata, they ordered their troops to be arrayed, and then came out for battle, having made Karna their generalissimo by tying the auspicious thread round his wrists, and having caused many foremost of Brahmanas, by presents of vessels of curds, clarified butter, akshatas, coins of gold, kine, jewels and gems, and costly robes, to pray for their victory, and having caused heralds and musicians, and panegyrists to adore them with hymns about victory. The Pandavas also, O king, having gone through their morning rites, issued from their camp, resolved on battle. Then commenced a fierce battle, making the hair to stand on end, between the Kurus and the Pandavas, each desirous of vanquishing the other. During the commandership of Karna, the battle that took place between the Kuru and the Pandava troops was exceedingly fierce and lasted for two days. Then Vrisha (Karna) having made an immense slaughter of his enemies in battle, was at last slain in the sight of the Dhartarashtras, by Arjuna. Then Sanjaya, repairing to Hastinapura told Dhritarashtra all that had happened at Kurujangala."

Janamejaya said, "Having heard of the fall of Bhishma and that other mighty car-warrior, Drona, the old king Dhritarashtra the son of Ambika had been afflicted with great grief. How, O foremost of Brahmanas, could he, plunged into grief, support his life having heard of the death of Karna, that well-wisher of Duryodhana?...