The Mahabharata of Krishna-Dwaipayana Vyasa, Volume 1 Books 1, 2 and 3 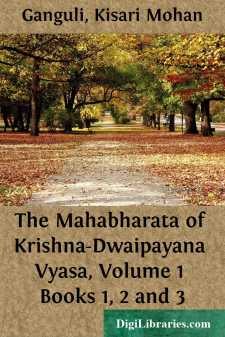 THE MAHABHARATA ADI PARVA SECTION I

Om! Having bowed down to Narayana and Nara, the most exalted male being, and also to the goddess Saraswati, must the word Jaya be uttered.

Ugrasrava, the son of Lomaharshana, surnamed Sauti, well-versed in the Puranas, bending with humility, one day approached the great sages of rigid vows, sitting at their ease, who had attended the twelve years' sacrifice of Saunaka, surnamed Kulapati, in the forest of Naimisha. Those ascetics, wishing to hear his wonderful narrations, presently began to address him who had thus arrived at that recluse abode of the inhabitants of the forest of Naimisha. Having been entertained with due respect by those holy men, he saluted those Munis (sages) with joined palms, even all of them, and inquired about the progress of their asceticism. Then all the ascetics being again seated, the son of Lomaharshana humbly occupied the seat that was assigned to him. Seeing that he was comfortably seated, and recovered from fatigue, one of the Rishis beginning the conversation, asked him, 'Whence comest thou, O lotus-eyed Sauti, and where hast thou spent the time? Tell me, who ask thee, in detail.'

Accomplished in speech, Sauti, thus questioned, gave in the midst of that big assemblage of contemplative Munis a full and proper answer in words consonant with their mode of life.

"Sauti said, 'Having heard the diverse sacred and wonderful stories which were composed in his Mahabharata by Krishna-Dwaipayana, and which were recited in full by Vaisampayana at the Snake-sacrifice of the high-souled royal sage Janamejaya and in the presence also of that chief of Princes, the son of Parikshit, and having wandered about, visiting many sacred waters and holy shrines, I journeyed to the country venerated by the Dwijas (twice-born) and called Samantapanchaka where formerly was fought the battle between the children of Kuru and Pandu, and all the chiefs of the land ranged on either side. Thence, anxious to see you, I am come into your presence. Ye reverend sages, all of whom are to me as Brahma; ye greatly blessed who shine in this place of sacrifice with the splendour of the solar fire: ye who have concluded the silent meditations and have fed the holy fire; and yet who are sitting—without care, what, O ye Dwijas (twice-born), shall I repeat, shall I recount the sacred stories collected in the Puranas containing precepts of religious duty and of worldly profit, or the acts of illustrious saints and sovereigns of mankind?"

"The Rishi replied, 'The Purana, first promulgated by the great Rishi Dwaipayana, and which after having been heard both by the gods and the Brahmarshis was highly esteemed, being the most eminent narrative that exists, diversified both in diction and division, possessing subtile meanings logically combined, and gleaned from the Vedas, is a sacred work. Composed in elegant language, it includeth the subjects of other books. It is elucidated by other Shastras, and comprehendeth the sense of the four Vedas. We are desirous of hearing that history also called Bharata, the holy composition of the wonderful Vyasa, which dispelleth the fear of evil, just as it was cheerfully recited by the Rishi Vaisampayana, under the direction of Dwaipayana himself, at the snake-sacrifice of Raja Janamejaya?'

"Sauti then said, 'Having bowed down to the primordial being Isana, to whom multitudes make offerings, and who is adored by the multitude; who is the true incorruptible one, Brahma, perceptible, imperceptible, eternal; who is both a non-existing and an existing-non-existing being; who is the universe and also distinct from the existing and non-existing universe; who is the creator of high and low; the ancient, exalted, inexhaustible one; who is Vishnu, beneficent and the beneficence itself, worthy of all preference, pure and immaculate; who is Hari, the ruler of the faculties, the guide of all things moveable and immoveable; I will declare the sacred thoughts of the illustrious sage Vyasa, of marvellous deeds and worshipped here by all....