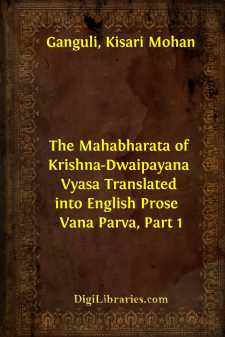 Om! Having bowed down to Narayana, and Nara the foremost of male beings, and the goddess Saraswati also, must the word Jaya be uttered.

Janamejaya said, "O thou foremost of regenerate ones, deceitfully defeated at dice by the sons of Dhritarashtra and their counsellors, incensed by those wicked ones that thus brought about a fierce animosity, and addressed in language that was so cruel, what did the Kuru princes, my ancestors—the sons of Pritha—(then) do? How also did the sons of Pritha, equal unto Sakra in prowess, deprived of affluence and suddenly overwhelmed with misery, pass their days in the forest? Who followed the steps of those princes plunged in excess of affliction? And how did those high souled ones bear themselves and derive their sustenance, and where did they put up? And, O illustrious ascetic and foremost of Brahmanas, how did those twelve years (of exile) of those warriors who were slayers of foes, pass away in the forest? And undeserving of pain, how did that princess, the best of her sex, devoted to her husbands, eminently virtuous, and always speaking the truth, endure that painful exile in the forest? O thou of ascetic wealth tell me all this in detail, for, O Brahmana, I desire to hear thee narrate the history of those heroes possessed of abundant prowess and lustre. Truly my curiosity is great."

Vaisampayana said, "Thus defeated at dice and incensed by the wicked sons of Dhritarashtra and their counsellors, the sons of Pritha set out from Hastinapura. And issuing through Vardhamana gate of the city, the Pandavas bearing their weapons and accompanied by Draupadi set out in a northerly direction. Indrasena and others, with servants numbering altogether fourteen, with their wives, followed them on swift cars. And the citizens learning of their departure became overwhelmed with sorrow, and began to censure Bhishma and Vidura and Drona and Gautama. And having met together they thus addressed one another fearlessly.

"'Alas, our families, we ourselves, and our homes are all gone, when the wicked Duryodhana, backed by the son of Suvala, by Karna and Dussasana, aspireth to this kingdom. And, Oh, our families, our (ancestral) usages, our virtue and prosperity, are all doomed where this sinful wretch supported by wretches as sinful aspireth to the kingdom! And, Oh, how can happiness be there where these are not! Duryodhana beareth malice towards all superiors, hath taken leave of good conduct, and quarreleth with those that are near to him in blood. Covetous and vain and mean, he is cruel by nature. The whole earth is doomed when Duryodhana becometh its ruler. Thither, therefore, let us proceed whither the merciful and high-minded sons of Pandu with passions under control and victorious over foes, and possessed of modesty and renown, and devoted to pious practices, repair!'"

Vaisampayana said, "And saying this, the citizens went after the Pandavas, and having met them, they all, with joined hands, thus addressed the sons of Kunti and Madri....