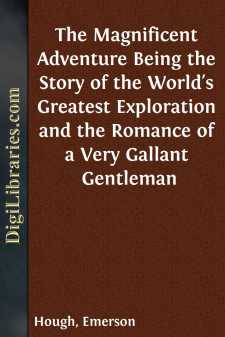 CHAPTER I MOTHER AND SON

A woman, tall, somewhat angular, dark of hair and eye, strong of features—a woman now approaching middle age—sat looking out over the long, tree-clad slopes that ran down from the gallery front of the mansion house to the gate at the distant roadway. She had sat thus for some moments, many moments, her gaze intently fixed, as though waiting for something—something or someone that she did not now see, but expected soon to see.

It was late afternoon of a day so beautiful that not even old Albemarle, beauty spot of Virginia, ever produced one more beautiful—not in the hundred years preceding that day, nor in the century since then. For this was more than a hundred years ago; and what is now an ancient land was then a half opened region, settled only here and there by the great plantations of the well-to-do. The house that lay at the summit of the long and gentle slope, flanked by its wide galleries—its flung doors opening it from front to rear to the gaze as one approached—had all the rude comfort and assuredness usual with the gentry of that time and place.

It was the privilege, and the habit, of the Widow Lewis to sit idly when she liked, but her attitude now was not that of idleness. Intentness, reposeful acceptance of life, rather, showed in her motionless, long-sustained position. She was patient, as women are; but her strong pose, its freedom from material support, her restrained power to do or to endure, gave her the look of owning something more than resignation, something more than patience. A strong figure of a woman, one would have said had one seen her, sitting on the gallery of her old home a hundred and twenty-four years ago.

The Widow Lewis stared straight down at the gate, a quarter of a mile away, with yearning in her gaze. But as so often happens, what she awaited did not appear at the time and place she herself had set. There fell at the western end of the gallery a shadow—a tall shadow, but she did not see it. She did not hear the footfall, not stealthy, but quite silent, with which the tall owner of the shadow came toward her from the gallery end.

It was a young man, or rather boy, no more than eighteen years of age, who stood now and gazed at her after his silent approach, so like that of an Indian savage. Half savage himself he seemed now, as he stood, clad in the buckskin garments of the chase, then not unusual in the Virginian borderlands among settlers and hunters, and not held outré among a people so often called to the chase or to war.

His tunic was of dressed deer hide, his well-fitting leggings also of that material. His feet were covered with moccasins, although his hat and the neat scarf at his neck were those of a gentleman. He was a practical youth, one would have said, for no ornament of any sort was to be seen upon his garb. In his hand he carried a long rifle of the sort then used thereabout. At his belt swung the hide of a raccoon, the bodies of a few squirrels.

Had you been a close observer, you would have found each squirrel shot fair through the head. Indeed, a look into the gray eye of the silent-paced youth would have assured you in advance of his skill with his weapons—you would have known that to be natural with him.

You would not soon have found his like, even in that land of tall hunting men. He was a grand young being as he stood there, straight and clean-limbed; hard-bitten of muscle, albeit so young; powerful and graceful in his stride. The beauty of youth was his, and of a strong heredity—that you might have seen.

The years of youth were his, yes; but the lightness of youth did not rest on his brow. While he was not yet eighteen, the gravity of manhood was his.

He did not smile now, as he saw his mother sitting there absorbed, gazing out for his return, and not seeing him now that he had returned. Instead, he stepped forward, and quietly laid a hand upon her shoulder, not with any attempt to surprise or startle her, but as if he knew that she would accept it as the announcement of his presence.

He was right. The strong figure in the chair did not start away....