The Machinery of the Universe Mechanical Conceptions of Physical Phenomena

by A. E. (Amos Emerson) Dolbear 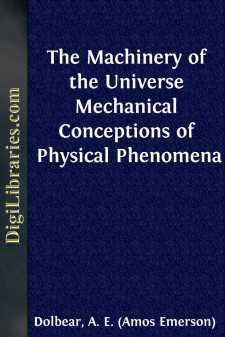 Ideas of phenomena ancient and modern, metaphysical and mechanical—Imponderables—Forces, invented and discarded—Explanations—Energy, its factors, Kinetic and Potential—Motions, kinds and transformations of—Mechanical, molecular, and atomic—Invention of Ethers, Faraday's conceptions.

‘And now we might add something concerning a most subtle spirit which pervades and lies hid in all gross bodies, by the force and action of which spirit the particles of bodies attract each other at near distances, and cohere if contiguous, and electric bodies operate at greater distances, as well repelling as attracting neighbouring corpuscles, and light is emitted, reflected, inflected, and heats bodies, and all sensation is excited, and members of animal bodies move at the command of the will.’—Newton, Principia.

In Newton's day the whole field of nature was practically lying fallow. No fundamental principles were known until the law of gravitation was discovered. This law was behind all the work of Copernicus, Kepler, and Galileo, and what they had done needed interpretation. It was quite natural that the most obvious and mechanical phenomena should first be reduced, and so the Principia was concerned with mechanical principles applied to astronomical problems. To us, who have grown up familiar with the principles and conceptions underlying them, all varieties of mechanical phenomena seem so obvious, that it is difficult for us to understand how any one could be obtuse to them; but the records of Newton's time, and immediately after this, show that they were not so easy of apprehension. It may be remembered that they were not adopted in France till long after Newton's day. In spite of what is thought to be reasonable, it really requires something more than complete demonstration to convince most of us of the truth of an idea, should the truth happen to be of a kind not familiar, or should it chance to be opposed to our more or less well-defined notions of what it is or ought to be. If those who labour for and attain what they think to be the truth about any matter, were a little better informed concerning mental processes and the conditions under which ideas grow and displace others, they would be more patient with mankind; teachers of every rank might then discover that what is often called stupidity may be nothing else than mental inertia, which can no more be made active by simply willing than can the movement of a cannon ball by a like effort. We grow into our beliefs and opinions upon all matters, and scientific ideas are no exceptions.

Whewell, in his History of the Inductive Sciences, says that the Greeks made no headway in physical science because they lacked appropriate ideas. The evidence is overwhelming that they were as observing, as acute, as reasonable as any who live to-day. With this view, it would appear that the great discoverers must have been men who started out with appropriate ideas: were looking for what they found. If, then, one reflects upon the exceeding great difficulty there is in discovering one new truth, and the immense amount of work needed to disentangle it, it would appear as if even the most successful have but indistinct ideas of what is really appropriate, and that their mechanical conceptions become clarified by doing their work....