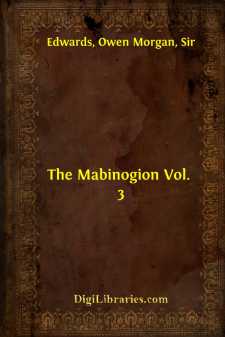 Pwyll, prince of Dyved, was lord of the seven Cantrevs of Dyved; and once upon a time he was at Narberth his chief palace, and he was minded to go and hunt, and the part of his dominions in which it pleased him to hunt was Glyn Cuch.  So he set forth from Narberth that night, and went as far as Llwyn Diarwyd.   And that night he tarried there, and early on the morrow he rose and came to Glyn Cuch; when he let loose the dogs in the wood, and sounded the horn, and began the chace.  And as he followed the dogs, he lost his companions; and whilst he listened to the hounds, he heard the cry of other hounds, a cry different from his own, and coming in the opposite direction.

And he beheld a glade in the wood forming a level plain, and as his dogs came to the edge of the glade, he saw a stag before the other dogs.  And lo, as it reached the middle of the glade, the dogs that followed the stag overtook it, and brought it down.  Then looked he at the colour of the dogs, staying not to look at the stag, and of all the hounds that he had seen in the world, he had never seen any that were like unto those.  For their hair was of a brilliant shining white, and their ears were red; and as the whiteness of their bodies shone, so did the redness of their ears glisten.  And he came towards the dogs, and drove away those that had brought down the stag, and set his own dogs upon it.

And as he was setting on his dogs, he saw a horseman coming towards him upon a large light grey steed, with a hunting horn about his neck, and clad in garments of grey woollen in the fashion of a hunting garb.  And the horseman drew near and spoke unto him thus.  “Chieftain,” said he, “I know who thou art, and I greet thee not.”  “Peradventure,” said Pwyll, “thou art of such dignity that thou shouldest not do so.”  “Verily,” answered he, “it is not my dignity that prevents me.”  “What is it then, O chieftain?” asked he.  “By Heaven, it is by reason of thine own ignorance and want of courtesy.”  “What discourtesy, Chieftain, hast thou seen in me?”  “Greater discourtesy saw I never in man,” said he, “than to drive away the dogs that were killing the stag, and to set upon it thine own.  This was discourteous, and though I may not be revenged upon thee, yet I declare to Heaven that I will do thee more dishonour than the value of an hundred stags.”  “O chieftain,” he replied, “if I have done ill I will redeem thy friendship.”  “How wilt thou redeem it?”  “According as thy dignity may be, but I know not who thou art?”  “A crowned King am I in the land whence I come.”  “Lord,” said he, “may the day prosper with thee, and from what land comest thou?”  “From Annwvyn,” answered he; “Arawn, a King of Annwvyn, am I.”  “Lord,” said he, “how may I gain thy friendship?”  “After this manner mayest thou,” he said.  “There is a man whose dominions are opposite to mine, who is ever warring against me, and he is Havgan, a King of Annwvyn, and by ridding me of this oppression which thou canst easily do shalt thou gain my friendship.”  “Gladly will I do this,” said he, “show me how I may.”  “I will show thee.  Behold thus it is thou mayest.  I will make firm friendship with thee; and this will I do, I will send thee to Annwvyn in my stead, and I will give thee the fairest lady thou didst ever behold, to be thy companion, and I will put my form and semblance upon thee, so that not a page of the chamber, nor an officer, nor any other man that has always followed me shall know that it is not I.  And this shall be for the space of a year from to-morrow, and then will we meet in this place.”  “Yes,” said he; “but when I shall have been there for the space of a year, by what means shall I discover him of whom thou speakest?”  “One year from this night,” he answered, “is the time fixed between him and me, that we should meet at the Ford; be thou there in my likeness, and with one stroke that thou givest him, he shall no longer live.  And if he ask thee to give him another, give it not, how much soever he may entreat thee, for when I did so, he fought with me next day as well as ever before.”  “Verily,” said Pwyll, “what shall I do concerning my kingdom?”  Said Arawn, “I will cause that no one in all thy dominions, neither man, nor woman, shall know that I am not thou, and I will go there in thy stead.”  “Gladly then,” said Pwyll, “will I set forward.”  “Clear shall be thy path and nothing shall detain thee, until thou come into my dominions, and I myself will be thy guide!”

So he conducted him until he came in sight of the palace and its dwellings.  “Behold,” said he, “the Court and the kingdom in thy power.  Enter the Court, there is no one there who will know thee, and when thou seest what service is done there, thou wilt know the customs of the Court.”

So he went forward to the Court, and when he came there, he beheld sleeping rooms, and halls, and chambers, and the most beautiful buildings ever seen.  And he went into the hall to disarray, and there came youths and pages and disarrayed him, and all as they entered saluted him.  And two knights came and drew his hunting dress from about him, and clothed him in a vesture of silk and gold.  And the hall was prepared, and behold he saw the household and the host enter in, and the host was the most comely and the best equipped that he had ever seen.  And with them came in likewise the Queen, who was the fairest woman that he ever yet beheld.  And she had on a yellow robe of shining satin; and they washed and went to the table, and they sat, the Queen upon one side of him, and one who seemed to be an Earl on the other side....