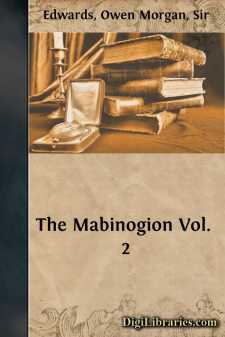 GERAINT THE SON OF ERBIN.

Arthur was accustomed to hold his Court at Caerlleon upon Usk.  And there he held it seven Easters, and five Christmases.  And once upon a time he held his Court there at Whitsuntide.  For Caerlleon was the place most easy of access in his dominions, both by sea and by land.  And there were assembled nine crowned kings, who were his tributaries, and likewise earls and barons.  For they were his invited guests at all the high festivals, unless they were prevented by any great hindrance.  And when he was at Caerlleon, holding his Court, thirteen churches were set apart for mass.  And thus were they appointed: one church for Arthur, and his kings, and his guests; and the second for Gwenhwyvar and her ladies; and the third for the Steward of the Household and the Suitors; and the fourth for the Franks, and the other officers; and the other nine churches were for the nine Masters of the Household, and chiefly for Gwalchmai; for he, from the eminence of his warlike fame, and from the nobleness of his birth, was the most exalted of the nine.  And there was no other arrangement respecting the churches than that which we have mentioned above.

Glewlwyd Gavaelvawr was the chief porter; but he did not himself perform the office, except at one of the three high festivals, for he had seven men to serve him; and they divided the year amongst them.  They were Grynn, and Pen Pighon, and Llaes Cymyn, and Gogyfwlch, and Gwrdnei with Cat’s eyes, who could see as well by night as by day, and Drem the son of Dremhitid, and Clust the son of Clustveinyd; and these were Arthur’s guards.  And on Whit Tuesday, as the King sat at the banquet, lo! there entered a tall, fair-headed youth, clad in a coat and a surcoat of diapred satin, and a golden-hilted sword about his neck, and low shoes of leather upon his feet.  And he came, and stood before Arthur.  “Hail to thee, Lord!” said he.  “Heaven prosper thee,” he answered, “and be thou welcome.  Dost thou bring any new tidings?”  “I do, Lord,” he said.  “I know thee not,” said Arthur.  “It is a marvel to me that thou dost not know me.  I am one of thy foresters, Lord, in the Forest of Dean, and my name is Madawc, the son of Twrgadarn.”  “Tell me thine errand,” said Arthur.  “I will do so, Lord,” said he.  “In the Forest I saw a stag, the like of which beheld I never yet.”  “What is there about him,” asked Arthur, “that thou never yet didst see his like?”  “He is of pure white, Lord, and he does not herd with any other animal through stateliness and pride, so royal is his bearing.  And I come to seek thy counsel, Lord, and to know thy will concerning him.”  “It seems best to me,” said Arthur, “to go and hunt him to-morrow at break of day; and to cause general notice thereof to be given to-night in all quarters of the Court.”  And Arryfuerys was Arthur’s chief huntsman, and Arelivri was his chief page.  And all received notice; and thus it was arranged.  And they sent the youth before them.  Then Gwenhwyvar said to Arthur, “Wilt thou permit me, Lord,” said she, “to go to-morrow to see and hear the hunt of the stag of which the young man spoke?”  “I will, gladly,” said Arthur.  “Then will I go,” said she.  And Gwalchmai said to Arthur, “Lord, if it seem well to thee, permit that into whose hunt soever the stag shall come, that one, be he a knight or one on foot, may cut off his head, and give it to whom he pleases, whether to his own ladylove, or to the lady of his friend.”  “I grant it gladly,” said Arthur, “and let the Steward of the Household be chastised if all are not ready to-morrow for the chase.”

And they passed the night with songs, and diversions, and discourse, and ample entertainment.  And when it was time for them all to go to sleep, they went.  And when the next day came, they arose; and Arthur called the attendants, who guarded his couch.  And these were four pages, whose names were Cadyrnerth the son of Porthawr Gandwy, and Ambreu the son of Bedwor, and Amhar, the son of Arthur, and Goreu the son of Custennin.  And these men came to Arthur, and saluted him, and arrayed him in his garments.  And Arthur wondered that Gwenhwyvar did not awake, and did not move in her bed: and the attendants wished to awaken her.  “Disturb her not,” said Arthur, “for she had rather sleep than go to see the hunting.”

Then Arthur went forth, and he heard two horns sounding, one from near the lodging of the chief huntsman, and the other from near that of the chief page.  And the whole assembly of the multitudes came to Arthur, and they took the road to the Forest....