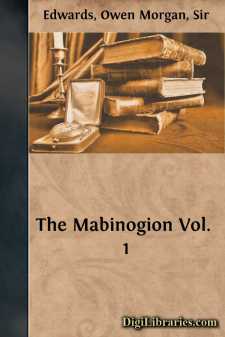 More than half a century ago Lady Charlotte Guest gave The Mabinogion to English readers in the form which, probably, will ever most delight them.  Her transcript of the Red Book of Hergest was not perfect, she found the meaning of many a Welsh phrase obscure, but her rendering is generally very accurate; and the Celtic tales retain in their new dress much of the charm, which so often evades the translator, of a perfect style formed by generations of narrating.

The Red Book of Hergest, from which The Mabinogion are taken, is a collection of tales and poems written during the fourteenth century.  Some of the Mabinogion in it have been reconstructed in Norman and Crusading times, but they contain reminiscences of a more distant period, often but half understood by the later story-teller.  Among these are “The Dream of Rhonabwy,” “The Lady of the Fountain,” and “Peredur the son of Evrawc”—the three which happen to come first in the Red Book.  These are Christian, but with distant glimpses of Celtic heathenism.  The adventures are all grouped around Arthur and his knights; and a kind of connection is given to the three tales by the presence of Owen and his mysterious ravens.

Others, especially the four Mabinogion properly so called and the Tale of Lludd and Llevelys, are far older; they are older than Christianity, and older than Arthur.

In this new edition of Lady Guest’s translation I have put, in the form of footnotes, what appears to me to be a more correct or a more literal rendering of some of the passages of the Welsh.  This course makes it unnecessary to tamper with the charming translation that has become a classic of the English language.

I am very grateful to the Principal and Fellows of Jesus College for access to the Red Book, to Dr J. Gwenogvryn Evans for permission to use his edition and to Lord Wimborne (the Ivor of Lady Guest’s dedication) for information kindly given.

TO IVOR AND MERTHYR

Infants as you yet are, I feel that I cannot dedicate more fitly than to you these venerable relics of ancient lore, and I do so in the hope of inciting you to cultivate the Literature of “Gwyllt Walia,” in whose beautiful language you are being initiated, and amongst whose free mountains you were born.

May you become early imbued with the chivalric and exalted sense of honour, and the fervent patriotism for which its sons have ever been celebrated.

May you learn to emulate the noble qualities of Ivor Hael, and the firm attachment to your Native Country, which distinguished that Ivor Bach, after whom the elder of you was named.

THE LADY OF THE FOUNTAIN.

King Arthur was at Caerlleon upon Usk; and one day he sat in his chamber; and with him were Owain the son of Urien, and Kynon the son of Clydno, and Kai the son of Kyner; and Gwenhwyvar and her hand-maidens at needlework by the window.  And if it should be said that there was a porter at Arthur’s palace, there was none.  Glewlwyd Gavaelvawr was there, acting as porter, to welcome guests and strangers, and to receive them with honour, and to inform them of the manners and customs of the Court; and to direct those who came to the Hall or to the presence chamber, and those who came to take up their lodging.

In the centre of the chamber king Arthur sat, upon a seat of green rushes, over which was spread a covering of flame-coloured satin; and a cushion of red satin was under his elbow.

Then Arthur spoke, “If I thought you would not disparage me,” said he, “I would sleep while I wait for my repast; and you can entertain one another with relating tales, and can obtain a flagon of mead and some meat from Kai.”  And the King went to sleep.  And Kynon the son of Clydno asked Kai for that which Arthur had promised them.  “I too will have the good tale which he promised to me,” said Kai.  “Nay,” answered Kynon, “fairer will it be for thee to fulfil Arthur’s behest in the first place, and then we will tell thee the best tale that we know.”  So Kai went to the kitchen and to the mead-cellar, and returned, bearing a flagon of mead, and a golden goblet, and a handful of skewers upon which were broiled collops of meat.  Then they ate the collops and began to drink the mead.  “Now” said Kai, “it is time for you to give me my story.”  “Kynon,” said Owain, “do thou pay to Kai the tale that is his due.”  “Truly,” said Kynon, “thou art older, and are a better teller of tales, and hast seen more marvellous things than I; do thou therefore pay Kai his tale.”  “Begin thyself,” quoth Owain, “with the best that thou knowest.”  “I will do so,” answered Kynon....