The Lure of the Labrador Wild 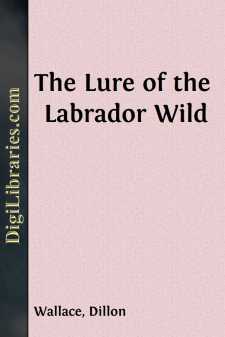 Three years have passed since Hubbard and I began that fateful journey into Labrador of which this volume is a record. A little more than a year has elapsed since the first edition of our record made its appearance from the press. Meanwhile I have looked behind the ranges. Grand Lake has again borne me upon the bosom of her broad, deep waters into the great lonely wilderness that lured Hubbard to his death.

It was a day in June last year that found me again at the point where some inexplicable fate had led Hubbard and me to pass unexplored the bay that here extends northward to receive the Nascaupee River, along which lay the trail for which we were searching, and induced us to take, instead, that other course that carried us into the dreadful Susan Valley. How vividly I saw it all again—Hubbard resting on his paddle, and then rising up for a better view, as he said, "Oh, that's just a bay and it isn't worth while to take time to explore it. The river comes in up here at the end of the lake. They all said it was at the end of the lake." And we said, "Yes, it is at the end of the lake; they all said so," and went on, for that was before we knew—Hubbard never knew. A perceptible current, a questioning word, the turn of a paddle would have set us right. No current was noticed, no word was spoken, and the paddle sent us straight toward those blue hills yonder, where Suffering and Starvation and Death were hidden and waiting for us. How little we expected to meet these grim strangers then. That July day came back to me as if it had been but the day before. I believe I never missed Hubbard so much as at that moment. I never felt his loss so keenly as then. An almost irresistible impulse seized me to go on into our old trail and hurry to the camp where we had left him that stormy October day and find if he were not after all still there and waiting for me to come back to him.

Reluctantly I thrust the impulse aside. Armed with the experience gained upon the former expedition, and information gleaned from the Indians, I turned into the northern trail, through the valley of the Nascaupee, and began a journey that carried me eight hundred miles to the storm-swept shores of Ungava Bay, and two thousand miles with dog sledge over endless reaches of ice and snow.

While I struggled northward with new companions, Hubbard was always with me to inspire and urge me on. Often and often at night as I sat, disheartened and alone, by the camp-fire while the rain beat down and the wind soughed drearily through the firtops, he would come and sit by me as of old, and as of old I would hear his gentle voice and his words of encouragement. Then I would go to my blankets with new courage, resolved to fight the battle to the end.

One day our camp was pitched upon the shores of Lake Michikamau, and as I looked for the first time upon the waters of the lake which Hubbard had so longed to reach, I lived over again that day when he returned from his climb to the summit of the great grey mountain which now bears his name, with the joyful news that there just behind the ridge lay Michikamau; then the weary wind-bound days that followed and the race down the trail with all its horrors; our kiss and embrace; and my final glimpse of the little white tent in which he lay.

And so with the remembrance of his example as an inspiration the work was finished by me, the survivor, but to Hubbard and to his memory belong the credit and the honour, for it was only through my training with him and this inspiration received from him that I was able to carry to successful completion what he had so well planned....