The Luck of Thirteen Wanderings and Flight through Montenegro and Serbia 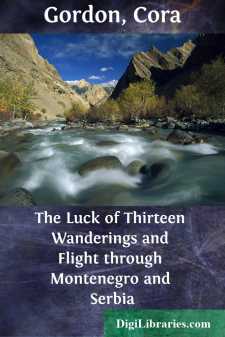 Add to My Favorites
Published: 8 years ago
Downloads: 50
Rating: (0 Votes)

It is curious to follow anything right back to its inception, and to discover from what extraordinary causes results are due. It is strange, for instance, to find that the luck of the thirteen began right back at the time when Jan, motoring back from Uzhitze down the valley of the Morava, coming fastish round a corner, plumped right up to the axle in a slough of clinging wet sandy mud. The car almost shrugged its shoulders as it settled down, and would have said, if cars could speak, "Well, what are you going to do about that, eh?" It was about the 264th mud hole in which Jan's motor had stuck, and we sat down to wait for the inevitable bullocks. But it was a Sunday and bullocks were few; the wait became tedious, and in the intervals of thought which alternated with the intervals of exasperation, Jan realized that he needed a holiday.

To be explicit. Jan was acting as engineer to Dr. Berry's Serbian Mission from the Royal Free Hospital:—Jan Gordon, and Jo is his wife, Cora Josephine Gordon, artist, and V.A.D.

We had a six months of work behind us. We had seen the typhus, and had dodged the dreaded louse who carries the infection, we had seen the typhus dwindle and die with the onrush of summer. We had helped to clean and prepare six hospitals at Vrntze or Vrnjatchka Banja—whichever you prefer. We had helped Mr. Berry, the great surgeon, to ventilate his hospitals by smashing the windows—one had been a child again for a moment. Jo had learned Serbian and was assisting Dr. Helen Boyle, the Brighton mind specialist, to run a large and flourishing out-patient department to which tuberculosis and diphtheria—two scourges of Serbia—came in their shoals. We had endeavoured to ward off typhoid by initiating a sort of sanitary vigilance committee, having first sacked the chief of police: we had laid drains, which the chief Serbian engineer said he would pull up as soon as we had gone away. We had helped in the plans of a very necessary slaughter-house, which Mr. Berry was going to present to the town. There was an excuse for Jan's desire. The English papers had been howling about the typhus months after the disease had been chased out by English, French, and American doctors, who had disinfected the country till it reeked of formalin and sulphur; shoals of devoted Englishwomen were still pouring over, generously ready to risk their lives in a danger which no longer existed. Our own unit, which had dwindled to a comfortable—almost a family—number, with Mr. Berry as father, had been suddenly enlarged by an addition of ten. These ten complicated things, they all naturally wanted work, and we had cornered all the jobs.

So, after the fatigues of February, March, and April, and the heat of June, Jan quite decided on that Uzhitze mud patch that a holiday would do little harm to himself, and good to everybody else. Then, however, came the problem of Jo. Jo is a socialistic sort of a person with conservative instincts. She has the feminine ability to get her wheels on a rail and run comfortably along till Jan appears like a big railway accident and throws the scenery about; but once the resolution accomplished she pursues the idea with a determination and ferocity which leaves Jan far in the background....