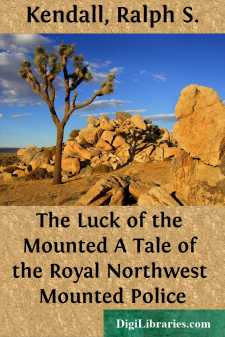 All day long the blizzard had raged, in one continuous squalling moaning roar—the fine-spun snow swirling and drifting about the barrack-buildings and grounds of the old Mounted Police Post of L. Division. Whirraru!-ee!—thrumm-mm! hummed the biting nor'easter through the cross-tree rigging of the towering flag-pole in the centre of the wind-swept square, while the slapping flag-halyards kept up an infernal "devil's tattoo." With snow-bound roof from which hung huge icicles, like walrus-tusks, the big main building loomed up, ghostly and indistinct, amidst the whirling, white-wreathed world, save where, from the lighted windows broad streamers of radiance stabbed the surrounding gloom; reflecting the driving snow-spume like dust-motes dancing in a sunbeam.

Enveloped in snow-drifts and barely visible in the uncertain light there clustered about the central structure the long, low-lying guard-room, stables, quartermaster's store, and several smaller adjacent buildings comprising "The Barracks." It was a bitter February night in South Alberta.

From the vicinity of the guard-room the muffled-up figure of a man, with head down against the driving blizzard, padded noiselessly with moccasined feet up the pathway leading to the main building. Soon reaching his destination, he dived hastily through the double storm-doors of the middle entrance into the passage, and banged them to.

Flanking him on either side, in welcome contrast to the bitter world outside, he beheld the all-familiar sight of two inviting portals, each radiating light, warmth, and good fellowship—the one on his right hand particularly. A moment he halted irresolutely between regimental canteen and library; then, for some reason best known to himself, he steadily ignored both, for the time being, and passing on began slowly to mount a short flight of stairs at the end of the passage.

Sweet music beguiled each reluctant step of his ascent: the tinkle of a piano accompaniment to a roaring jovial chorus from the canteen assuring him with plaintive, but futile insistence just then, that—

Reaching the landing he paused for a space in an intent listening attitude outside the closed door of a room marked No. 3. From within came the sounds of men's voices raised in a high-pitched, gabbling altercation.

Turning swiftly to an imaginary audience, his expressive young countenance contorted into a grimace of unholy glee, the listener flung aloft his arms and blithely executed a few noiseless steps of an impromptu war-dance....