The Love of Books The Philobiblon of Richard de Bury 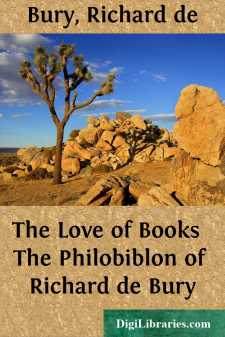 The Author of the Book.

Richard de Bury (1281-1345), so called from being born near Bury St. Edmunds, was the son of Sir Richard Aungerville. He studied at Oxford; and was subsequently chosen to be tutor to Prince Edward of Windsor, afterwards Edward III. His loyalty to the cause of Queen Isabella and the Prince involved him in danger. On the accession of his pupil he was made successively Cofferer, Treasurer of the Wardrobe, Archdeacon of Northampton, Prebendary of Lincoln, Sarum, and Lichfield, Keeper of the Privy Purse, Ambassador on two occasions to Pope John XXII, who appointed him a chaplain of the papal chapel, Dean of Wells, and ultimately, at the end of the year 1333, Bishop of Durham; the King and Queen, the King of Scots, and all the magnates north of the Trent, together with a multitude of nobles and many others, were present at his enthronization. It is noteworthy that during his stay at Avignon, probably in 1330, he made the acquaintance of Petrarch, who has left us a brief account of their intercourse. In 1332 Richard visited Cambridge, as one of the King's commissioners, to inquire into the state of the King's Scholars there, and perhaps then became a member of the Gild of St. Mary—one of the two gilds which founded Corpus Christi College.

In 1334 he became High Chancellor of England, and Treasurer in 1336, resigning the former office in 1335, so that he might help the King in dealing with affairs abroad and in Scotland, and took a most distinguished part in diplomatic negociations between England and France. In 1339 he was again in his bishopric. Thereafter his name occurs often among those appointed to treat of peace with Philip of France, and with Bruce of Scotland. It appears that he was not in Parliament in 1344. Wasted by long sickness—longa infirmitate decoctus—on the 14th of April, 1345, Richard de Bury died at Auckland, and was buried in Durham Cathedral.

The Bishop as Booklover.

According to the concluding note, the Philobiblon was completed on the bishop's fifty-eighth birthday, the 24th of January, 1345, so that even though weakened by illness, Richard must have been actively engaged in his literary efforts to the very end of his generous and noble life. His enthusiastic devoted biographer Chambre[1] gives a vivid account of the bishop's bookloving propensities, supplementary to what can be gathered from the Philobiblon itself. Iste summe delectabatur in multitudine librorum; he had more books, as was commonly reported, than all the other English bishops put together. He had a separate library in each of his residences, and wherever he was residing, so many books lay about his bed-chamber, that it was hardly possible to stand or move without treading upon them. All the time he could spare from business was devoted either to religious offices or to his books. Every day while at table he would have a book read to him, unless some special guest were present, and afterwards would engage in discussion on the subject of the reading....