The Love Affairs of Pixie 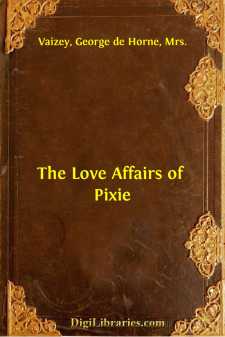 The Question of Noses.

When Pixie O’Shaughnessy had reached her twentieth birthday it was borne in upon her with the nature of a shock that she was not beautiful. Hitherto a buoyant and innocent self-satisfaction, coupled with the atmosphere of love and admiration by which she was surrounded in the family circle, had succeeded in blinding her eyes to the very obvious defects of feature which the mirror portrayed. But suddenly, sharply, her eyes were opened.

“Did it ever occur to you, Bridgie, my dear, that I’ve grown-up plain?” she demanded of her sister, Mrs Victor, as the two sat by the fire one winter afternoon, partaking luxuriously of strong tea and potato cakes, and at the sound of such a surprising question Mrs Victor started as if a crack of thunder had suddenly pealed through the quiet room. She stared in amazement; her big, grey eyes widened dramatically.

“My good child,” she demanded sternly, “whatever made you think of asking such a preposterous question?”

“’Twas borne in on me!” sighed Pixie sadly. “It’s the way with life; ye go jog-trotting along, blind and cheerful, until suddenly ye bang your head against a wall, and your eyes are opened! ’Twas the same with me. I looked at myself every day, but I never saw. Habit, my dear, blindfolded me like a bandage, and looking at good-looking people all day long it seemed only natural that I should look nice too. But this morning the sun shone, and I stood before the glass twisting about to try on my new hat, and, Bridgie, the truth was revealed! My nose!”

“What’s the matter with your nose?” demanded Mrs Victor. Her own sweet, delicately cut face was flushed with anger, and she sat with stiffened back staring across the fireplace as if demanding compensation for a personal injury.

Pixie sighed, and helped herself to another slice of potato cake.

“It scoops!” she said plaintively. “As you love me, Bridgie, can you deny it scoops?” And as if to illustrate the truth of her words she twisted her head so as to present her little profile for her sister’s inspection.

Truly it was not a classic outline! Sketched in bare outline it would have lacerated an artist’s eye, but then more things than line go to the making up a girlish face: there is youth, for instance, and a blooming complexion; there is vivacity, and sweetness, and an intangible something which for want of a better name we call “charm.” Mrs Victor beheld all these attributes in her sister’s face, and her eyes softened as they looked, but her voice was still resentful.

“Of course it scoops. It always did scoop. I like it to scoop.”

“I like them straight!” persisted Pixie. “And it isn’t as if it stopped at the nose. There’s my mouth—”

“The Mammoth Cave of Kentucky! D’you remember the Major’s old name? He was proud of your mouth. And you had no chin as a child. You ought to be thankful, Pixie, that you’ve grown to a chin!”